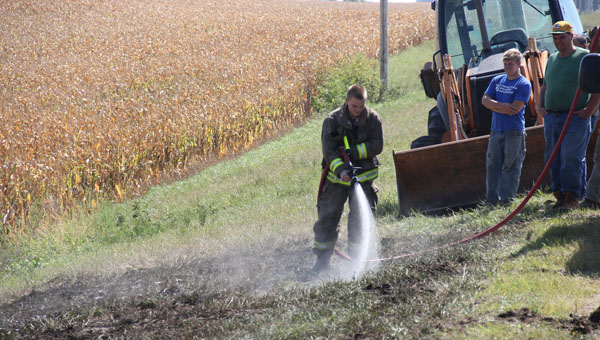 ARMSTRONG — A small grass fire was put out by a helping neighbor and a landowner and his grandson Wednesday afternoon.

Lowell Bangert, neighbor of Nordean Krueger, saw flames and rushed to help around 2 p.m. today. Krueger said Bangert thought Krueger’s house was on fire at first, but the flames turned out to be a small fire in the ditch off County Road 71 southeast of Armstrong.

Krueger said he and Bangert put out the fire by stomping on it, with help from Krueger’s grandson Justin, who brought a Case back hoe to spread dirt around. The fire affected an area of about 20 by 30 feet, Krueger estimated.

“We put it out with our feet,” Krueger said. “It burned really slowly.”

Albert Lea Township Fire Department first responded, then Conger Fire Department came. Because the fire was mostly out, Cody Knudson, a volunteer with Conger’s department, stayed to douse the area so it didn’t reignite. Krueger lives just down the road, at 19633 720th Ave., from where the fire was burning.

Krueger and his grandson were picking corn about a mile away, and Krueger said he’s glad the fire was contained to the ditch because of how dry his corn is just a few feet from where the grass burned. He said the area received seven-tenths of an inch of rain Tuesday night.

A representative with the Freeborn County Sheriff’s Office said that though there was rain, any moisture in that steep of a ditch would flow right into the fields before wetting the grassy ditch. If a cause is not determined, the representative said it’s possible the fire started from someone throwing a cigarette butt out of a window.

Freeborn County Sheriff Bob Kindler lifted the permit burning restriction Wednesday afternoon because of rains in the area. Those with proper permits are now able to have controlled burns.