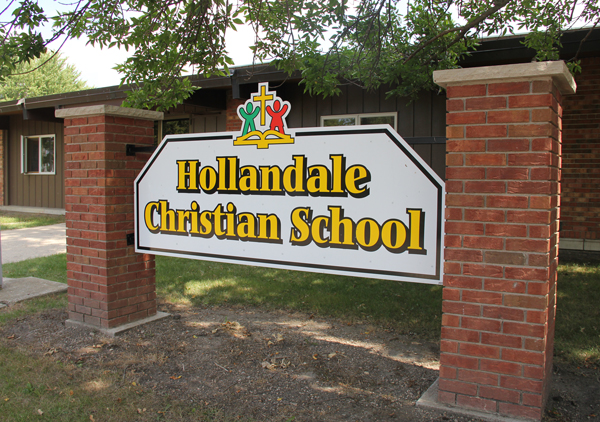 HOLLANDALE — This small town has many big things going on. Not only did school just start, but the town’s annual festival is this Saturday, too. Look to the box for a full listing of events.

Hollandale Christian School started its 2012-13 school year on Aug. 27. Principal Lisa Vos said everything is coming together and students are starting to find their routines.

“A real concern at the beginning of the school year is relationships between students,” Vos said.

Students at the school are separated into families, where one eighth-grader leads a group of students of all ages.

“Each group has eight or nine kids,” Vos said.

Vos said it’s important to have eighth-graders leading the group so the students can learn valuable leadership skills. It also helps kindergartners and the smaller children feel like they have peers to talk to at the school.

Families at the school do even more. They raise funds together by collecting box tops and milk caps, and they compete together at school events.

“They look out for each other,” Vos said.

Upcoming events at the school include the trip for seventh- and eighth-graders to Camp Foster on Sept. 17 and 18. The students learn about leadership and how to put it into practice. Vos said it’s important for the students at the small school to learn leadership because they’ll eventually attend much larger schools like Albert Lea High School and Austin High School.

“It puts them in a position where they can be leaders,” Vos said. “They know they don’t have to be followers.”

Vos said teaching leadership has unified the school and been a successful endeavor. Another upcoming event is the annual apple pie fundraiser. Orders are being taken at the school for the $12 homemade pies.

Vos said it takes about 50 bushels of apples to make the 750 pies they usually sell. The students, parents and many others get together the first weekend in October to form assembly lines and make the pies. People can place orders by calling the school at 507-889-3321.

The school is also continuing to fundraise for capital-improvement plans. The building was built in 1960 and the flooring and bathrooms are original. Vos said flooring in two classrooms has been replaced, but ideally the whole building will get new flooring at some point. The bathrooms also need upgrades. Alumni and families have been supportive of updating the school, which Vos appreciates.

“They want to continue to see quality Christian education in the area,” Vos said.