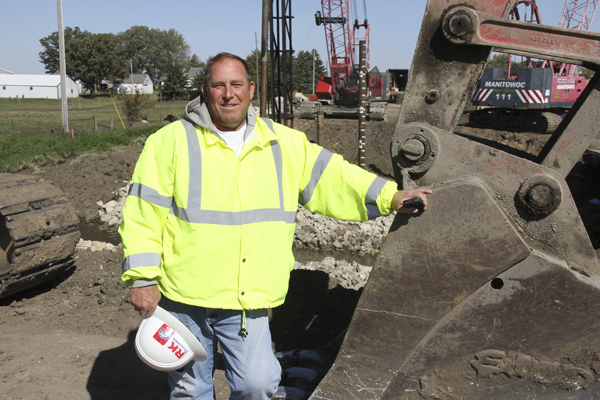 Dan Kenison of the Freeborn County Highway Department leans on an excavator Monday at the worksite for a new bridge south of Glenville on Freeborn County Road 5. -- Tim Engstrom/Albert Lea Tribune

This has been the biggest construction season for bridge building on Freeborn County roads in decades, and the man at the center of the action is about to celebrate his 30th year with the Freeborn County Highway Department.

Dan Kenison, 58, started in April 1982 as a diesel mechanic. He had graduated from Albert Lea High School in 1972. He took training at Albert Lea Vocational and Technical Institute, now a branch of Riverland Community College before going to work at Interstate Motor Trucks in 1974. He stayed there for eight years, then came to the county, knowing the shop foreman job would open up. He was hired by Dan Everds, the county engineer at the time.

Computers were making their way into road work by the late 1980s, and Kenison took an interest in them. He started helping surveyors with the new equipment, and the county engineer, Bill Groskurth, encouraged him to get formal training. 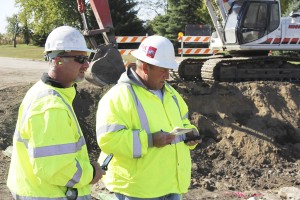 Highway technician Dan Kenison of the Freeborn County Highway Department, right, records measurements from a nearby pile driver Monday south of Glenville where a bridge is being built on Freeborn County Road 5.

Kenison took night classes with the Dunwoody Institute to learn surveying, legal descriptions, how to use the new computerized equipment and how to do computer-aided design. In 1993, when George Murphy retired, Kenison took a spot as engineer technician for the Highway Department. And Kenison set up the first computer network within the office so engineers, surveyors and technicians could share their large drawing files.

Nowadays at worksites he is the guy who records everything and makes sure the work is done to state and federal requirements, then documents it all to send in to the Minnesota Department of Transportation and, if there is federal dollars attached, the Federal Highway Administration. He is certified by the Minnesota Department of Transportation for grading and base standards, aggregate production and concrete field.

He said after a project is done there is a mound of paperwork to send in, and if the work has errors it can cost the county thousands of dollars. It’s important to record everything, he said, so funds are used as they should be.

The county this season is building five true bridges — not the box culvert kinds but ones with actual decks — and presently is building three bridges at once: on county roads 1, 5 and 34. Two more bridge projects will get rolling in October. Bridge work typically can be done spring, summer, winter or fall. 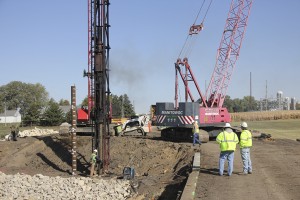 “It’s exciting with three of them going on at once. It’s really exciting,” Kenison said.

Freeborn County Engineer Sue Miller said this will be the biggest year for bridge building since the 1970s.

“We could not have done it without Dan,” she said.

Kenison has been an innovator for years. She said Everds recognized this trait early on.

“The county was designing and building our own stainless steel sanding equipment as there was little on the market that was affordable. That is just one of many examples where Dan has looked out for the safest, most economical way to provide our services,” she said.

She said he continues to stay up-to-date on software and has helped the county immensely with mapping.

“He lead Freeborn County into the GIS world and provided those services countywide until just a year ago when the official position was created within our IT Department. Dan still provides mentoring, and support to all of us who use GIS programs,” Miller said.

When Kenison’s not working, he is at home cooking or touring the countryside with his wife, Deb, on their Honda Gold Wing. They ride with a group on Wednesday nights and on pleasant-weather weekends, sometimes to Lanesboro and sometimes over to the Mississippi River communities.

Interesting fact: “I do most of the cooking at home,” he said, noting his wife likes to clean afterward so they work well together. He said he can whip up meals from what he finds in the cupboards and without a recipe.