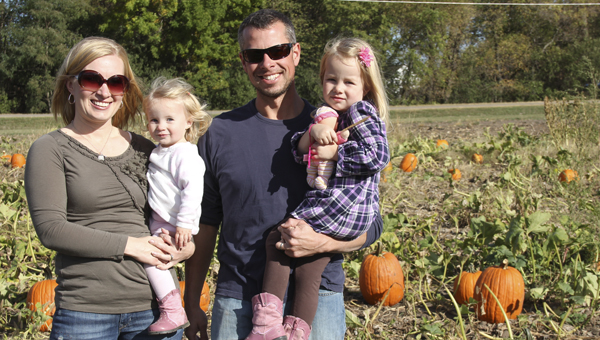 The Petersons stand in front of pumpkins at The Pumpkin Patch, which opens for the first time on Saturday. It is at the corner of Richway Drive and Itasca Road. Left to right are Lisa, Nora, Chad and Claire. -- Tim Engstrom/Albert Lea Tribune

There’s a new patch of pumpkins in town.

Chad and Lisa Peterson on Saturday will open The Pumpkin Patch at the corner of Richway Drive and Itasca Road, the area of the former Stables restaurant.

They are filling a gap for Albert Lea families that exists as a result of Larry Alvey closing Larry’s Pumpkin Patch after 27 years providing an autumn tradition.

Chad, 32, and Lisa, 31, planted pumpkins and other gourds on a three-quarter acre plot at their 8-acre parcel where for three years they have grown sweet corn. They still grow five plots of sweet corn, but this year they added pumpkins after Alvey approached them. He told them he planned to retire but wanted someone to take over running a pumpkin patch for the Albert Lea area.

“We’re honored he wanted us to do it,” Lisa said.

Alvey penned a letter to the editor about his years running a patch. It published Sept. 12. Part of it said: “I remember sunny days with cool breezes and warm temps in October and the hundreds of pumpkins just waiting for a home out in the patch! I also remember the weeds, cold winds, the rain and snow and sleet and being out to cover as many pumpkins as I could to prevent them from freezing! Yes, many, many great memories of 27 patches that have come and gone.”

Alvey, Chad said, was helpful in teaching the couple what and where to plant. They also acquired some of the familiar games and toys from Larry’s Pumpkin Patch.

“We had some extra space we weren’t using,” Chad said.

They will have straw bales and decorations, pumpkin bowling, croquet, horseshoes and games like guess the amount of candy corn in a jar. They left a field of corn with a trail to explore.

The Pumpkin Patch will be open 11 a.m. to 5 p.m. Saturdays and Sundays this coming month.

Chad said planting and preparing a pumpkin patch has been work for the family and fun, too. Pumpkins, of course, are planted by hand. They planted the pumpkins on Memorial Day weekend. Chad and Lisa have two daughters: Claire, 3, and Nora, 1.

“The kids have got to spend a lot of days out here while Lisa and I did the work,” he said.

The unusually dry and hot summer hasn’t been ideal for growing pumpkins, but they have many for people to choose from. They have several in the field and about 500 more pumpkins on a trailer so they could keep them cool and safe from rotting in the sun. They plan to set out the pumpkins before this Saturday’s opener.

Petersons don’t live at the patch. They live in the Shoreland Heights neighborhood in Albert Lea. He is a section gang foreman for the Union Pacific Railroad, and she is a payroll technician at Albert Lea City Hall.

One other area patch still exists

There is one other pumpkin patch in Freeborn County.

Farmer John’s Pumpkin Patch is owned by John Ulland and is in its 22nd year. It opens for the season on Saturday.

“Our first children are now bringing their children,” Ulland said.

It is at 90537 273rd St. in the eastern part of the county north of Austin near Corning. Watch out for inaccurate website maps or GPS devices, which often try to place the location in Mower County. The parking lot is the former Ulland Brothers property, and 273rd Street is a dead-end shooting off Mower-Freeborn Road.

Farmer John’s is open noon through 6 p.m. daily in the coming month.