The pelicans surround the Pelican Breeze

I usually try to take an early morning walk each day, weather and time permitting. I try to leave the house a little after 6 a.m. On my walk I usually venture past the access by Frank Hall Park. In the last couple of weeks there have been large numbers of pelicans in the channel like I have never seen before. The ironic part is that they are hanging around the Pelican Breeze II, docked by the access. 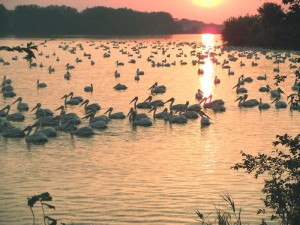 It almost seems like they are supposed to be there because that boat is there. I know the reality of it is that they are looking for food and evidently there are plenty of fish for them in the channel at this time.

If you haven’t already done so you should take some time to stop by the channel early in the morning to see the large number of birds. This is truly a natural wonder that nature has on display for our enjoyment.

While you’re at it, you might want to take your camera along because it makes for quite a picture. I can’t ever recall seeing that many pelicans in one place on this lake.

Yes, we do have a lot of wildlife to behold right here in our area. It seems that the pelicans have replaced the geese that seemed to inhabit that area earlier in the year. I suppose the geese were probably off somewhere getting ready for early goose season which opened this weekend.

Another thing about the pelicans that I really like is that you don’t have to watch where you step while walking.

We really do need to get some fall moisture, which I hope will come in the form of rain. In case you have had blinders on and haven’t noticed most of the area ponds and creeks are either dried up or slowed down to a trickle.

The fish kill that we have experienced this summer due to low water levels and extreme heat have to make a person wonder what lies ahead this winter. If the water levels continue to decline I will bet that there will surely be some winter kill on more than one of our area lakes.

It’s kind of thought provoking when you think about how much control we don’t have when it comes to nature.

All the studies and all the tests of water quality that have been done don’t really matter when the lakes, streams and rivers start drying up. Nature even had a hand in delaying the Republican National Convention although Rush Limbaugh is convinced that President Obama must have had something to do with it.

Minnesota’s hunters, wildlife enthusiasts and wildlife populations will benefit from the recent addition of 5,778 acres to the state’s wildlife management area system according to the Minnesota Department of Natural Resources.

Much of this newly protected land is in the southern half of the state. It includes an expansion of 17 WMAs and the addition of six new WMAs.

Many areas will be open for public use when the fall hunting seasons start in September.

The remainder will be ready later this year or early next year for public use. WMAs are open to public hunting and other compatible uses such as hiking, bird watching and snowshoeing.

DNR Commissioner Tom Landwehr thanked Pheasants Forever, The Nature Conservancy, Cass County, The Trust for Public Land, Minnesota Sharp-Tailed Grouse Society and Ducks Unlimited for their partnership in protecting more than half of these acres.

“Partners are the key to conservation,” said Landwehr. “We appreciate the help of these groups, our sportsmen for the legacy they leave for future generations of hunters and wildlife enthusiasts.”

Nearly 1,500 acres were purchased with funding from the Outdoor Heritage Fund, one of four funds created by the Clean Water, Land and Legacy Amendment, which receives one-third of the money raised by the state sales tax increase approved by Minnesota citizens in 2008.

According to Kim Hennings, DNR wildlife land acquisition coordinator, other major funding sources were the Reinvest in Minnesota Critical Habitat Matching program and the $6.50 surcharge on the small game license.

Most of the RIM matching dollars came from the sale of the critical habitat license plates. The $30 per year charge for the colorful plates generates more than $3 million a year that can be used to equally match private donations to acquire or develop critical habitat in the state.

“Most of the designated lands are additions to existing WMAs, complementing our previous investment in wildlife habitat,” said Ed Boggess, DNR fish and wildlife division director. “The new WMAs will expand opportunities for hunting and trapping.”

Until next time, take a little time to enjoy the outdoors experience and the world of nature that surrounds us.