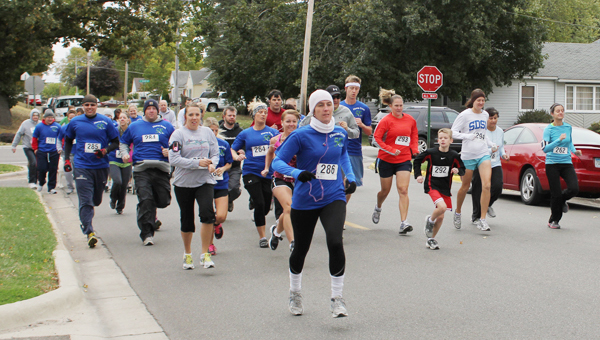 A local man is making it his mission to not only make residents at Thorne Crest Retirement Community more healthy, but the community as a whole, too.

Weston Hulst, wellness director at Thorne Crest, has organized the Thorne Crest 5k, a walking or running event. This is the second year the event has been held.

“We hope to make it annual and do it every year,” Hulst said. 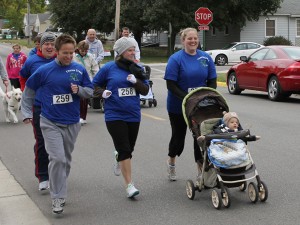 More than 35 people started the 5k at 9 a.m. Saturday. Hulst said that was just a couple of people fewer than last year’s event. The event is not a fundraiser, but entry fee funds go to prizes for participants.

Hulst said it’s been his goal to make Thorne Crest’s wellness program prosper and to also create a culture of wellness in Albert Lea.

Lucy Grippentrog and Marva Gullord both participated Saturday and said they were talked into it by Hulst, who is their instructor for a wellness class he teaches at Thorne Crest that’s open to anyone in the community.

“He’s a big instigator,” Grippentrog said with a smile. 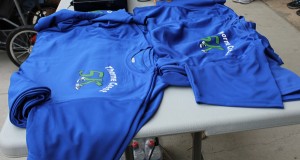 Thorne Crest Retirement Community held its second annual 5k walk/run event Saturday. T-shirts like these were worn by some of the participants. — Kelli Lageson/Albert Lea Tribune

The two women participated last year as well and said the event follows a nice route. Hulst said it starts at Thorne Crest on Hawthorne Street and goes east to connect with the trail along the lake. After getting onto Richway Drive, participants just have to get back to Garfield Street to finish at Thorne Crest.

“We time everyone and the top three male and female finishers will receive some sort of prize,” Hulst said.

Residents at Thorne Crest also help out. Staff and residents volunteer at the sign-up tables and the water station. While not all residents can help out, Hulst said many like to watch the event.

“There’s definitely a buzz in the building,” Hulst said.

Hulst said he enjoys planning the event because it’s different planning a fitness activity for all ages instead of just senior citizens.

“Most activities are geared toward seniors so it’s nice to plan an event like this,” Hulst said.

Look to the Tribune for results from the race in a future edition.