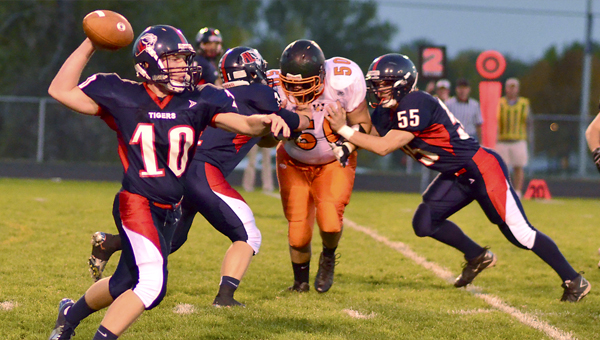 On Friday night, the Albert Lea Tigers found themselves down 21 points to the Winona Winhawks early in the second half, but battled their way to a near victory. The Tigers fell short when a pass was intercepted in the end zone with less than a minute to go in the game.

The final score of the game was 43-38 in favor of the visiting Winhawks, a close Homecoming game for the Tigers. 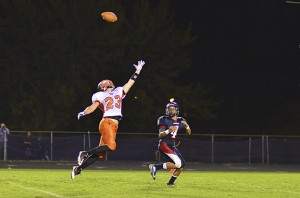 “We’ve got some work to do, I’m proud of what we’ve done,” said Tigers head coach Max Jeffrey. “We’re going to talk to the guys in the locker room here because we’ve got to get back to work, and it’s going to take a team effort to do that.”

After both teams failed to reach the goal line in the first quarter, things picked up a bit in the second. Winona started the scoring by hitting the end zone twice by mid-quarter to take a 14-0 lead.

The Tigers finally lit up the scoreboard with 3 minutes, 10 seconds remaining in the second quarter, when Makael Lunning ran it in. The extra point attempt was no good, putting the score at 14-6.

Winona didn’t waste any time responding to Albert Lea’s score. The Winhawks made it 20-6 when they crossed the goal line again on a catch and run. The point after was good, leaving the score at half time to be 21-6 in favor of the Winhawks. 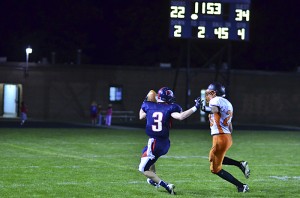 Buck Monson/Albert Lea Tribune Dylan See-Rockers does a little dance with the defender as he changes directions and scores to put Albert Lea within four points, once the two-point conversion was good.

“Our guys could have done one of two things at the half,” said Jeffrey. “They could have either packed it in, or they could have manned up and came out and played some football. And they did the second thing, and that tells you a lot about the character of our young men.”

That lit a little spark in the Tigers team, and they put on a performance from there on, out scoring the Winhawks 32-16 in the remainder of the game.

Lunning scored his second touchdown of the game in the third quarter, with a 41-yard reception at 7:33. The Tigers had a fumble recovery after that and Lunning scored again.After missing the point after attempt on their first touchdown, the Tigers abandoned the kicking game and went for the two-point conversion after every touchdown.

“We had some guys on the outside who can make plays, and they did,” said Jeffrey on the two-point conversion decisions. “Burkard put the ball right on the money, and that’s how we got some momentum going.”

Albert Lea was now within five points of Winona with the score at 22-27. The Tiger fans were about as loud as they could get, which fueled the fire lit under the Tigers. The Tigers went on to stop the Winhawks on fourth down, giving them a chance to take the lead for the first time in the game.

That momentum was quickly taken away when the punt was muffed by Lunning and the Winhawks recovered and scored just two plays later. After the point after was good, the score sat at 34-22 to begin the fourth quarter of play.

The Tigers were the first to score in the fourth quarter on a beautiful 45-yard catch and run by Dylan See-Rockers. See-Rockers did a little dance with the defender while changing directions to hit the end zone. And of course, the two-point conversion was good again. That put the Tigers just four points behind with a score of 34-30, with 11:50 remaining in the game.

“The offensive line started to play better, and you could tell, we put some points on the board,” said Jeffrey.

Just over a minute later, the Winhawks extended their lead again with a run, which made it a 40-30 game. The point after attempt failed.

It was Lunning again who took charge, running in another touchdown with 8:32 left in the game. Once again, the two-point conversion was good, and saw the Tigers just two points back at a score of 40-38.

“We had some gutty efforts from Ethan Abben and Makael Lunning, guys who took a lot of big hits tonight,” said Jeffrey.

Winona went down the field and scored a touchdown with just a few minutes left in the game, but the six points were taken off the board due to offensive holding. That six points along with an extra point would have made it tough for Albert Lea to come back. The Tigers stood tall and stuffed the Winhawks on multiple plays to force a field goal and make it a much easier hill to climb to win the game.

The score then sat at 43-38 with 5:44 left to mount a comeback. The Tigers moved the chains slowly but surely down the field. They missed a huge chance when an open receiver dropped a pass that could have led to a touchdown.

Just a few plays later, with under a minute to play, the Winhawks intercepted a pass in the end zone, that would end the Tigers’ hopes of winning in front of a packed stadium. The Winhawks then took a knee for the next two plays, and that was the end of the game.

“I’m really proud of their effort, there’s no doubt about that,” said Jeffrey on the performance of the team. “I love my guys.”