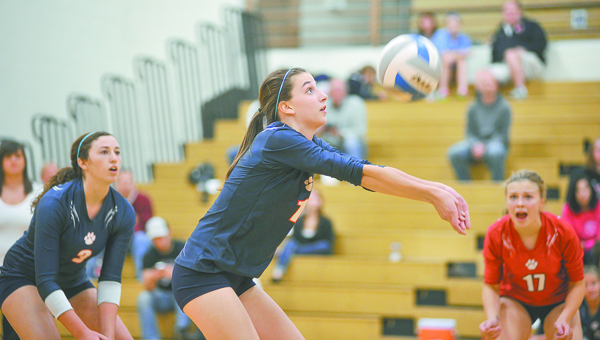 AUSTIN — The girls’ volleyball rivalry between Albert Lea and Austin can be very intense. This year was no different. After getting skunked 3-0 by Austin last year, the Tigers came out fighting right from the start and won the match 3-0.

“The rivalry is great in any sport that we play. They just turned it around,” Packers head coach Barry Brobeck said. “They came here with some fire in there, and took it to us.”

The Tigers were led by junior Annie Ladwig.

“She was terrific tonight. We couldn’t stop her,” said Brobeck. “I’m not sure how many kills she had, but it was way over double figures. And the setter, Bryn Woodside, was fabulous.”

The Tigers took control of the match early on and never let up. Game one saw the Tigers get off to a quick 13-5 start before letting the Packers get within three. Both teams scored points back and forth for the remainder of the game, with Albert Lea coming out on top 25-18 in a hard fought battle.

Austin came back in the second game equaling Albert Lea up to 17-17. The Tigers kicked it up a notch and finished the game strong with a 25-18 win.

“You always have to be ready to play in Austin, because they are going to come out gunning for us,” said Deyak.

In what would become the final game, Albert Lea had some good streaks of scoring, which helped them jump to a 21-9 lead. Again, the teams rallied back and forth for the remainder of the game to finish at a 25-16 win for the Tigers.

“The biggest thing our team has been working on is always playing our game,” Deyak said. “Keeping control of our offense and taking control of the pass so we can hit hard at our defenders. When we do that, we play really good volleyball.”

The Tigers’ next match is scheduled for 7:15 p.m. Thursday at Mankato East.

See the scoreboard for more detailed results from the Tuesday game.