To bump or not? 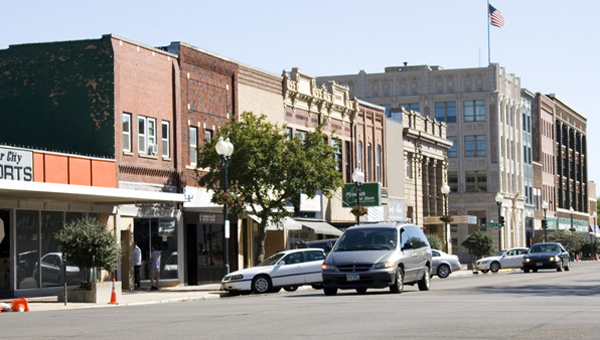 Business owners in downtown Albert Lea are showing mixed opinions about how proposed improvements to Broadway Avenue may affect their businesses.

While some are optimistic that the improvements to the street, infrastructure, sidewalk and other amenities will bring a fresh look and renewed interest, others are questioning the timing of the project, cost and final outcome. 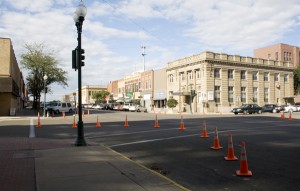 Cones are lined up Friday where potential new bumpouts may be installed during the Broadway Avenue project in 2013.

The proposed $4 million project, which is slated to come before the Albert Lea City Council for a vote on Sept. 24, calls for replacing deteriorating utilities underneath the street from Main Street to Fountain Street. It also calls for paving, replacing the sidewalks with wider ones, adding pedestrian plazas and revamping Fountain Lake Park, among other improvements. Plans for the upgrades have been rolled out in a series of meetings during the last few months.

The costs for the project are expected to be paid through a combination of funding options, such as assessments to business owners, $1 million in state bonding dollars, increases in property taxes and through the city’s water and sewer fund. Specific breakdowns of costs have not yet been announced.

Roberts, who is reaching retirement age, said she is not happy about her property getting assessed and noted she worries how this will impact her efforts to sell her building. She has been in business for 29 years, of which 24 years have been spent downtown.

Though she has a back door and parking in the back of her business, she asked what others who don’t will do while the improvements are actually taking place. She does not think the changes will bring additional people downtown.

John Brick, owner of Brick Furniture, said he thinks there are better ways the city could use its money. He, too, noted he did not think the project would bring additional people downtown.

Brick said he thinks the bumpout sidewalks, planned for at each intersection downtown, will restrict traffic. He said he saw this happen in Austin and is worried about it happening here.

He wishes the decision would come down to a community vote.

Kathy Sabinish, who owns Frames-R-Us with her husband, David, said she has mixed feelings about the project. She said she is excited for the fresh look and new planters that are proposed and is pleased William Street will not be blocked off.

“I’m feeling better about it now than I used to,” Sabinish said. “They’ve cut some of the costliest and that’s good.”

She said though she thinks people will come down to look at the downtown once the project is completed, after a short while, the activity will settle down.

She is trying to plan as much in advance as possible for the weeks the front-door access will be closed.

Eloise Adams, owner of Adams Originals, said she is concerned about the project because her business comes primarily from out-of-town people who drive by and decide to come in.

She said she is not in favor of the bumpouts because she thinks they will take away from the historical value of downtown.

Larry Fisher, of Fisher’s Fine Jewelers, said he, too, is not excited about the bumpouts and said he is concerned about switching from stoplights to stop signs at Clark and William streets.

Otherwise, he said, he wishes the project could have come two to three years later.

Still, others said they are excited about the potential changes the project could bring to the downtown.

Greg Undahl, co-owner of the new 112 on Broadway, said he supports the streetscape project 100 percent.

He said he does not mind the assessment, and noted that though there will be a few months of inconvenience, it will be worth it in the end.

Mark Stadheim, owner of Stadheim Jeweler’s, said when the project is completed, he does think businesses will benefit.

“As more activity goes on downtown, it brings more people,” he said.

Addie Rust, owner of Addie’s Floral & Gifts, said she is hopeful of the effects the project will have on her business and others downtown.

“Once it’s done, I think it will make downtown a more pleasant shopping experience,” Rust said.

She noted while she does not think it will necessarily bring in more Albert Lea residents, it will bring in more people from out of town.

“I’m hoping that when it’s all done, it’s going to be a really nice downtown,” she said.