Veteran Appreciation Day to be celebrated on Saturday

The ninth annual Veteran Appreciation Day at the American Legion in St. Angsar, Iowa, will be Saturday. Doors will open at 8:30 a.m. It is free and open to the public. Spouses and children are welcome. The CLM polka band will play. A delicious lunch will be served by Paradise Pizza. Bring your photos and memorabilia to share with others. There will be World War II and Korean War discussion groups. 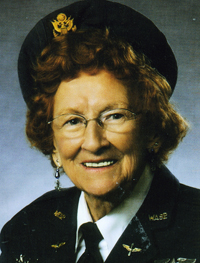 The master of ceremonies will be, Betty “Liz” Strohfus, 92, a World War II Women’s Airforce Service Polite of Faribault, recipient of the Congressional Gold Medal awarded by the Air Force Chief of Staff in Washington, D.C., in 2011. Stohfus was a flight instructor training male pilots how to fly before they went into combat. Even though several WASPs were killed or injured ferrying shot-up airplanes across the U.S. to maintenance facilities, WASPs were not considered Veterans until President Ronald Reagan signed a special law granting them veteran status. Strohfus is the last living WASP in our seven-state area. For more information contact the sponsor Phil Fleischer at 641-736-2346.