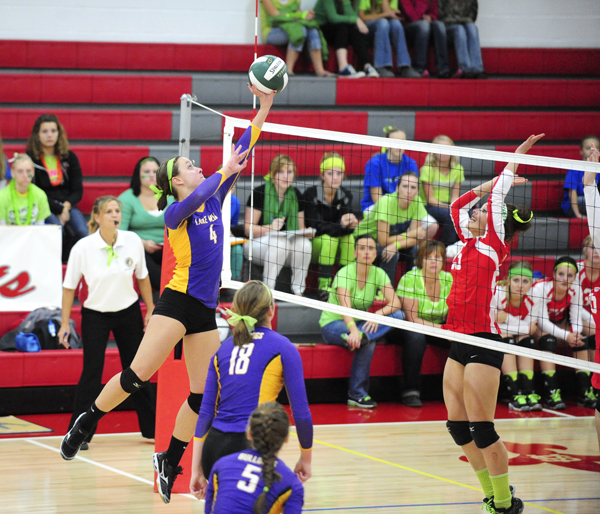 Bulldogs’ Brook Groe tips the ball over the net Thursday during a match against St. Ansgar. Lake Mills won 21-4 and 21-9.

In the first round of the quadrangular the Bulldogs faced the home team, St. Ansgar. In less than a half hour and with scores of 21-4 and 21-9, Lake Mills reached its goal — adding match No. 100 to the statistics.

“It’s kind of surreal really,” Bulldogs head coach Jim Boehmer said. “In order to do that, you’ve got to go through two and a half seasons. These seniors were sophomores and these juniors were freshman when it started.”

Boehmer reminded the girls as they ate cupcakes in celebration that the girls who came before them were to thank for getting the streak started.

In what would be the Bulldogs’ 101st win, they were matched with Forest City nearly point for point. Lake Mills had a 20-18 lead, but couldn’t get the last point to secure the set. Forest City took the game 22-20.

“Maybe we didn’t take Forest City seriously enough,” Boehmer said. “We’ve won six straight sets against them this year, and this is only the second time this year that we trailed in sets. We were up 20-18; we should never lose that, so that’ll be something we’ll have to keep working on.”

Megan Johnson, who plays front row for the Bulldogs, made adjustments to play more defensively in the second set against Forest City and Boehmer called the plan “a big game changer.”

“That was good that we had to come back and that it was tight early,” Boehmer said. “It was good to see the girls down and see how they’d respond. They did with no problem.”

The final match in the triangular was against North Union, another team the Bulldogs have seen a lot of this season.

“We have to realize we’re going to get every team’s best effort,” he said. “It could make their whole season if they beat us.”

Sweeping the quadrangular 3-0, the Bulldogs (40-0) finished the regular season with their winning streak at 102 straight games. Faced with plenty of pressure to uphold respectable records, the Bulldogs decided early on in the year that the 100-game mark was what they wanted to reach.

“When you cross that 100 plateau, that puts you up there with some elite programs,” Boehmer said. “To my knowledge, in my 21 years of coaching, nobody has had an undefeated regular season. So for us to have two back-to-back is pretty neat and might be one of those once in a lifetime things for these kids who have been a part of it.”

That’s not to say the team is perfect or even unbeatable. Boehmer said the Bulldogs can always find something to work on, but it scares other teams that the they are so hard to beat. What makes Boehmer nervous is that his girls aren’t too worried about it.

“They have an uncanny confidence,” Boehmer said. “We talked about it at school. They said, ‘We’re confident. We’re not cocky and we’re not arrogant. We just believe we’re going to win. We never ever feel in a set, even when we’re behind, that we’re going to lose.’ You’ve got to love that about a group of kids who are that confident in themselves and each other.”

The team’s next goal is to win its 41st game, which will likely be against North Union again, in the first round of regionals which begin Oct. 23 in Lake Mills.

“It’ll be the fifth time we’ve played them, but the first time in our gym,” Boehmer said. “That’s kind of tough for them. With our crowd, you walk in and you know it’s a volleyball game and nothing else. Our kids will be crazy and our fans will be crazy. I know I wouldn’t want to play in our gym if I wasn’t coaching Lake Mills. That’s the last place I’d want to be.”