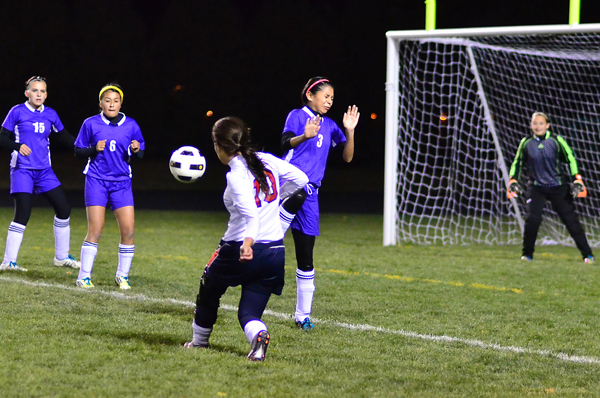 The Albert Lea girls’ soccer team defeated the Glencoe-Silver Lake Panthers in round one of the Section 2A tournament on Monday night in Albert Lea.

The fifth-seeded Tigers and 12th seeded Panthers squared off in a battle to see who would take on the two-time defending champions, Saint Peter, in round two.

The Tigers dominated the game from the start and held on for the 5-1 win.

Becca Dup got the Tigers on the board only 31 seconds into the game, giving the team a huge boost of confidence right out of the gates.

“Quick starts can kind of be a double-edged sword sometimes,” said Tigers coach Rick Barnhill. “Sometimes you take your foot off the gas and relax.”

Katie Williamson lit up the scoreboard next with her first goal of the season. That goal came about midway in the first half and put the Tigers up 2-0.

The Tigers hadn’t given the Panthers a shot on goal until they received a free kick and scored. With that score, the Panthers were right back in the game and coach Barnhill’s fear of the Tigers letting up was a risk.

Sophomore Megan Kortan put the coach at ease when she scored just a few minutes later to give the Tigers a two-goal lead again and give them some breathing room.

The Tigers led possession time in the first half, with a final total of 56 minutes of the game to the Panthers 24.

“We changed up our formation tonight,” said Barnhill. “We tried to put a little more pressure on the Panthers.”

The second half started out pretty slow with some back and forth play by both teams. Finally, about 24 minutes into the game, Gretta Johnson got the ball by the defenders and then snuck it around an attacking goal keeper to tap it in for the Tigers’ fourth goal of the game.

The final score of the game came from the once scoreless Williamson, who put in her second goal of the game.

“I’m very happy that we put up two good halves of scoring together,” said Barnhill. “I guess in a way, it’s good. I still have some concerns. Saint Peter is going to be a two to three goal favorite, easily. We’re just going to go after it, and see what we can do.”

“After looking at the numbers, I’m blown away,” said Barnhill. “The numbers really show who the team was putting on the pressure. I’m pretty happy that we ended up with a better-than-average scoring percentage.”

Another number that blew away the coach was that the Tigers had 15 corner kicks in the game compared to the zero by the Panthers. Corner kicks are indicative of how much pressure a team is putting on offensive.

“In an average game, we would be happy with four corner kicks,” said Barnhill. “Two in each half would be good. Last week in a game, we had three, and scored on one of them. Tonight, we had 15, and didn’t score on any of them.”

The coach was happy with the play of the team, but knows that they will need to get in a couple of good practices in the next two days to be able to play well on Thursday against the Saints.