Memorial services for Allen Thomas Engen, 84, of Albert Lea will be at 10:30 a.m. Saturday, at Ascension Lutheran Church. The Rev. Mark Boorsma will officiate.  Interment will be in Graceland Cemetery. Military honors will be accorded by the American Legion. Friends may greet the family one hour prior to the service at the church.  Online condolences are welcome at www.bayviewfuneral.com. 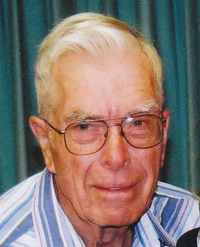 Al died of pneumonia on Friday, Oct. 12, 2012, at St. Marys Hospital in Rochester, surrounded by his family.

Allen Thomas Engen was born on June 20, 1928, in Whitehall, Wis., the son of Albert and Inga (Strand) Engen.  He grew up in Whitehall, graduating from high school there in 1946. He then graduated from Stout University in Menominee, Wis. Al served in the U.S. Army in Germany, during the Korean conflict. On Jan. 5, 1957, Al was united in marriage to Muriel Johnson in Minneapolis. In 1962 Al began working as an appraiser for the City of Albert Lea. In 1969 the family moved to St. Louis Park where he became Right-of-Way Agent for the city of St. Louis Park. He retired in 1991, and in 1997 he and Muriel returned to Albert Lea. Al was an active member of Ascension Lutheran Church a member of the Golden K II Kiwanis Club, the Moose Lodge and the YMCA.

Al and Muriel loved traveling and visited their son, Tom, in Germany several times and traveled throughout Europe together. They also had other great trips and cruises. They spent 16 winters in Phoenix where they spent time with their daughter Wendy and her family. For a number of years they enjoyed camping and did much travelling with their RV. Al spent lots of time in his woodworking shop, and was so talented and generous with his craft. He was also a generous volunteer throughout his life, including for Habitat for Humanity and St. John’s Lutheran Home. Al was always ready to help anyone in need. He and Muriel had 55 wonderful years together and he will be missed by his family and many friends. He was a great husband, dad and grandpa. Blessed be his memory.

Al was preceded in death by his parents and his son Thomas in October of 2010.