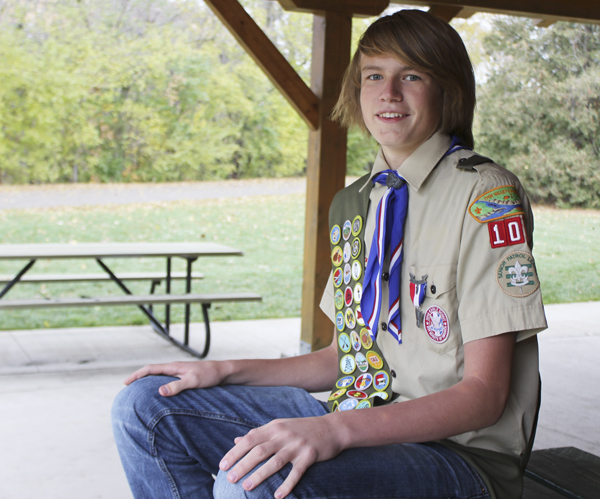 John Buringa sits on a bench outside the boathouse at Brookside Park Friday. Buringa earned his Eagle Scout rank by building four benches that can turn into two tables for the boathouse in October 2010. -- Trey Mewes/Albert Lea Tribune

Once John Buringa gets motivated, it’s hard to stop him.

This longtime Boy Scout’s parents told him he needed to work on his Eagle Scout rank before he could get his driver’s license. So that’s what he did, shortly before his 16th birthday.

“It’s not that hard to get your Eagle Scout that young; it’s just your motivation,” he said.

Buringa, now 18, did something a little outside the box to earn it, however. Among the requirements to earn an Eagle Scout rank is a volunteer project that benefits the community. While researching other Eagle Scout projects, Buringa came across a lot of Scouts who built benches or made tables for local parks.

“I didn’t want to do anything somebody else did,” he said.

So he improvised — by creating the four park benches that turn into two tables at the Brookside Boathouse.

With donated materials, Buringa and his father cut the pieces to make each bench — each bench needed many pieces, he said — and put them together over a two-day period in October of 2010.

After waiting a few months to complete his paperwork, Buringa officially became an Eagle Scout in February 2011, though he waited to hold his Eagle Scout ceremony until recently.

Buringa plans to apply to either California Polytechnic State University or the University of North Dakota this winter, and he plans on studying engineering so he can one day become a civil engineer.

He probably won’t need a lot of motivation to get through college, even if he needed a little to become an Eagle Scout.

“If I had waited until after I got my license, I probably wouldn’t have become an Eagle Scout,” he said with a laugh. “That actually turned out pretty good.”

Interesting fact: Buringa caught a 4-pound bass in a drainage ditch near City Arena this year.