Funeral services for Bernice H. Anderson of Albert Lea will be at 1:30 p.m. Thursday at Trinity Lutheran Church in Albert Lea. The Rev. Curtis Zieske will officiate. Interment will be in Lakewood Cemetery, Albert Lea. Visitation will be from 5 to 7 p.m. Wednesday at Bonnerup Funeral Service, Albert Lea, and one hour before the service at the church. 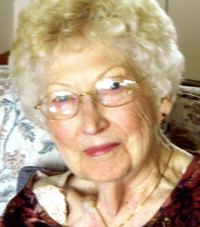 She was born on Jan. 6, 1919, in Albert Lea the daughter of Marinus and Andrea (Jensen) Jorgensen; she grew up and attended school there. On Dec. 24, 1939, she married Alton Anderson and raised her family in the area.

Bernice was a member of Trinity Lutheran Church in Albert Lea. She enjoyed baking, collecting antiques

and taking care of her grandchildren. She was a dog lover; for most of her adult life, she enjoyed the companionship of the various dogs she had.

Memorials suggested to the Humane Society of Freeborn County.