Bills is concerned about budget 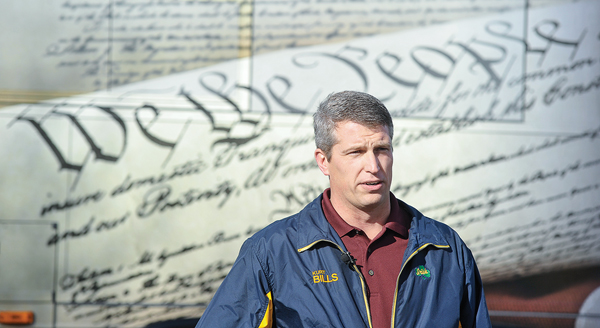 Kurt Bills, Republican challenger to Senator Amy Klobuchar, speaks to the media during a stop in Austin Wednesday afternoon. Behind is a mural painted on the side of the Tea Party Express bus that also stopped in Austin. -- Eric Johnson/Albert Lea Tribune

Kurt Bills, who rolled in with his campaign buses, followed by the Tea Party Express Mobile Call Center, greeted people at Hy-Vee and briefly explained why he should be elected as U.S. Senator from Minnesota. 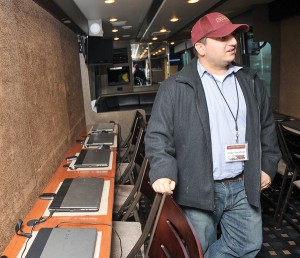 Andy Surabian talks about the role the Tea Party Express is playing in this year’s election during a stop in Austin Wednesday afternoon.

“We need a U.S. Senate that’s actually going to put a budget forward,” he said.

Bills is in the midst of a statewide tour in which he will make a stop in every county and talk to its voters. Wednesday, Bills stopped in Mankato, Austin and Rochester.

He told Austin listeners that as a high school economics teacher in Rosemount he sees problems with national debt and want the U.S. Senate to do more about that. The reason he is running, he said, is because of the kids.

“I’m running because of all the questions the kids ask me,” he said.

While Bills’ students obviously know about his campaign, that’s not something they talk about at school, Bills said.

Like most candidates, Bills said he wants to “get in there to help the middle class.” Bills, referencing his own children, noted high college costs, among other issues. He added he has the experience from 18 years of teaching, serving on Rosemount City Council and in the Minnesota House.

Bills will finish his tour over the next coming days as the election approaches.

The Tea Party bus, which is following plenty of Republican and Tea Party candidates during this election season, is in the midst of an 81-day, 23-state “get out tour.” The bus offers opportunities for party supporters to register voters with their party via computer or phone. On Wednesday, during its stop in Mankato, supporters did just that. While the bus crew made time for Kurt Bills — Republican challenger to U.S. Sen. Amy Klobuchar, D-Minn. — it will be off to Denver as early as Thursday for more touring.

Andy Surabian, who is touring with the bus, said he hasn’t been home in quite some time, and for only five days during the entire 81-day tour.