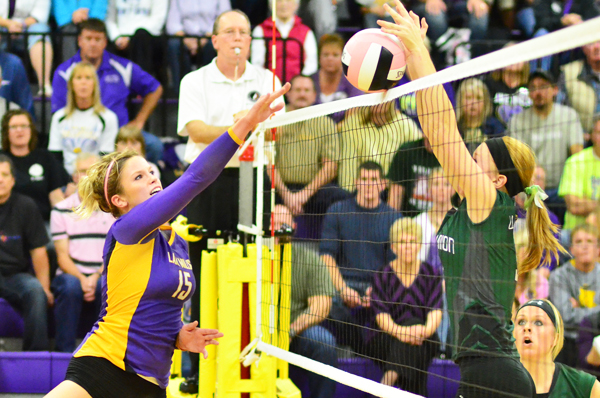 LAKE MILLS — The Lake Mills girls’ volleyball team improved its perfect record this year to 41-0 with a win over North Union during Class 2A regional tournament action on Tuesday night in Lake Mills.

“The girls know they aren’t perfect individually,” said Lake Mills coach Jim Boehmer. “But as a team, they are.”

The Bulldogs got a quick start by jumping out to a 10-1 lead, but the Warriors didn’t give up that easy.

“You always want that lead,” said Boehmer. “But there are times when you would rather not. You almost relax, and think we got them, and you kind of let up a bit.”

The Bulldogs did let up a little letting the Warriors to within three points late in the game, before Emily Kingland killed the ball for the final point. The Bulldogs won the first game 25-21.

The undefeated Bulldogs didn’t let up in Game 2, starting off with a huge 8-0 lead on the Warriors. Once again, the Warriors did not let up, getting within four points in the mid to late portion of the game. The Bulldogs closed it out and won 25-18, putting them just one game from advancing on to the next round of the tournament.

“We missed a lot of serves out the back end,” said Boehmer. “We haven’t missed that many serves all year.”

In Game 3, the Bulldogs found themselves down for the first time all night at 4-3. They were able to hold the Warriors to a point at a time, while they were scoring two to three points in a bunch.

“We responded well,” said Boehmer. “We ended up winning Game 3 by the widest margin.”

Coach Boehmer said the team came out with too much energy and just needed to slow down a little.

“We need to control our emotions,” said Boehmer. “We were a little wild there, at least we can breathe a sigh of relief now.”

The Bulldogs will play the winner of the Eagle Grove vs. West Fork game on Friday in Lake Mills.