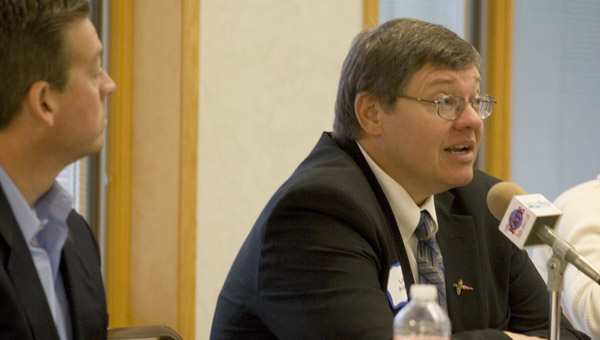 Local government aid and job growth were two of the key issues of a debate Saturday morning of the candidates for state Legislature.

Sparks, who was first elected to office in 2002, said he thinks the legislators need to focus on local government aid unless they want everyone to move out of the rural areas to the metro.

Likewise, he said if he is re-elected to office, one of his top priorities is to reinstate the market value tax credit. He said the elimination of the credit has created a heavier burden on rural Minnesota than the rest of the state.

“I will never ever vote for a tax bill that requires seniors or the middle class to pay more to stay in their homes,” Sparks said.

Anderson said LGA is what keeps the smaller rural communities going, which in turn creates jobs. He noted in towns of 60 people, the towns can’t afford to replace fire hydrants without the aid.

Murray said he stood up against his party to stand up for LGA in the previous legislative session and he will continue to do so if re-elected. Savick, the

former mayor of Wells, said she saw firsthand the damage that cuts to LGA can make. When LGA is cut, local leaders are asked to decide whether to cut essential services or raise property taxes.

Poppe said it is important for southern Minnesota to receive local government aid to continue to grow the economy. She said LGA contributes to the quality of life, which is what helps bring people to the area.

Neitzell said LGA is important to keep rural areas strong and noted there are many opportunities in local communities.

When asked their opinions on the Jobs Opportunity Building Zones Program, a tax-incentive program for attracting companies to Greater Minnesota that was successful in Freeborn County, candidates delivered a variety of responses. 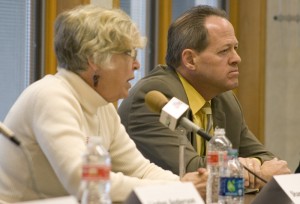 Former Wells mayor Shannon Savicks responds to a question Saturday during the debate. Next to her is incumbent District 27A state Rep. Rich Murray, her opponent. -- Sarah Stultz/Albert Lea Tribune

Murray said something needs to be done to reduce regulations so businesses can start quicker, and the state also needs to work on reducing taxes for businesses.

Savick talked about the importance of education and making sure people have the skills to get jobs.

Poppe said she thinks the state needs to have some investment into the economy to provide for job growth, noting the $13.5 million recently awarded for the expansion of the Hormel Institute.

Neitzell said he supports the government stepping in and assisting with business startup, referring to a business that could have started in Austin but ended up in Wisconsin. The business now has more than 300 jobs.

Sparks said he thinks the district needs a strong voice in St. Paul for a program similar to JOBZ and referred to some other programs that have been successful in the Fargo-Moorhead area.

Anderson said he would support legislation that would restructure taxes and some of the regulations on businesses.

A question from the audience asked the candidates what they would do to make sure community colleges such as Riverland Community College receive the funding they need.

Savick, who is now retired, said she recognizes the importance of higher education because that is what helped her get a job in the high-tech industry.

She said she would do everything she could to make sure community colleges are funded. 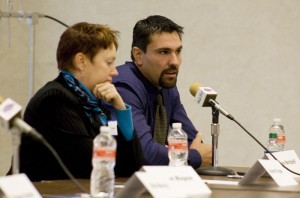 Murray said he recognizes the critical nature of lifelong learning that community college can provide and said he thinks it is important to develop a partnership with high schools, businesses and colleges to encourage training and skills development to meet demands.

Poppe, working as a counselor at Riverland, said one of the things that is a problem with the higher education system is the rising cost of tuition.

She said she would love to see the costs reduced for the colleges, which would in turn reduce tuition.

Neitzell said it is becoming more important than ever to be competitive in the world market and would support education funding.

Sparks talked about the need to invest in the buildings of the college and making tuition affordable for students.

He said the budget has been unfairly balanced on the backs of students.

Anderson said in addition to directly funding the colleges, more needs to be done to fund scholarships for students.

Regarding energy policies, Murray said he thinks every form of energy needs to be on the table, including coal, nuclear and new resources. But no matter what is done, however, he said legislators need to make sure it is cost effective.

Savick said she was against any more nuclear plants and said there are many issues to consider when considering energy policy.

She said she believes the state needs to do everything it can to create renewable energy and become less dependent on foreign sources.

Neitzell said he would support opening up some of the restrictions on frac sand and noted that to be able to help people be able to afford their energy, the country shouldn’t be shipping coal to China or buying oil from across the ocean.

Poppe said she thinks it is important to find a balance, while also considering the effect on the environment.

Anderson said he, too, thinks the state needs to have a balanced approach, but questions whether technology is available for more green energy.

Sparks said he thinks there needs to be a balanced approach but also mentioned the need to have all options on the table moving forward.

He said he makes a decision in St. Paul, the biggest thing to consider is the ratepayers back home.

Anderson said he would be willing to slow down the requirement, again stating he did not think the technology was there to meet this standard.

He said while he wants to help people think about conserving, he doesn’t see a time when people will ever use less.

Savick said she would be willing to look at the issue if elected but had not thought about it much before prior to the debate. She talked about having reasonable goals.

Murray said while most of the smaller utility companies are on track to achieve the standard, he said legislators could work to make the requirement easier to achieve.

Poppe and Sparks said they would not support slowing the standard.

The candidates were also asked questions about roads and bridges, Obamacare and pensions for teachers.

All forums will be replayed on KATE Radio Nov. 4.