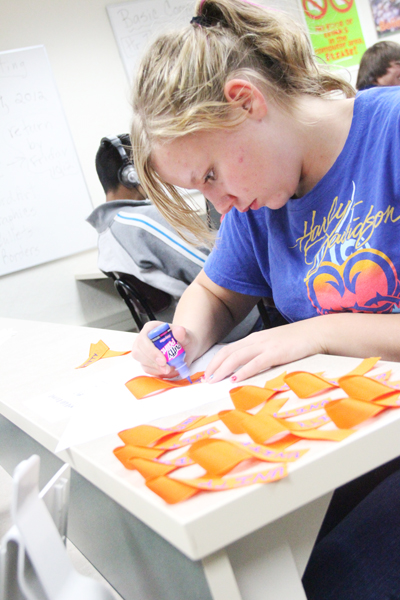 The school’s colors may be blue and cherry, but today an orange wave will hit the halls of Albert Lea High School. 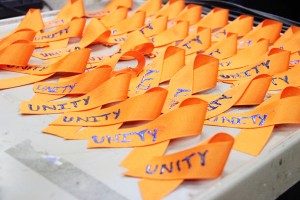 Orange ribbons lay to dry after students painted the word unity on them in blue paint. -- Danielle Boss/Albert Lea Tribune

Students will arrive at school today decked out in orange apparel for Unity Day, an observation in the middle of National Bullying Prevention Month, to show support for peers who have been victims of bullying. The high school’s Equity Leader Dawn Kruse, who spearheaded the effort, said the day will serve as a visual reminder for students to have a voice against the negative actions and remarks central to bullying.

Along with orange clothing, students can sign a giant unity poster, which will be available during all three lunch periods.

“They’re pledging that they are willing to stand up against bullying and those who may bully others,” Kruse said.

Each period, a representative from the student council will be present to explain the purpose of the poster and to encourage students to participate.

Other student groups are also getting involved. A 30-pupil digital citizenship class taught by Louise Berhow set to work Tuesday making orange ribbons that say “unity” for all of the high school staff to wear today.

“She felt like that was something that tied in with the content of her class,” Kruse said.

The timing worked well. Unity Day coincided with the class reading stories that teach cyber bullying and how to prevent it as part of a larger series on safe Internet usage. Hacking, identity theft and online etiquette were other parts of the unit. 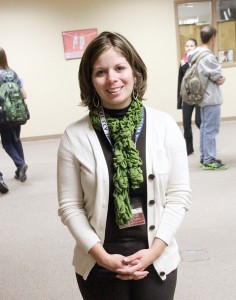 She and her digital citizenship students plus several other students aimed to make a couple hundred ribbons altogether, enough for all the staff plus any students who wanted them.

Advisory periods have Unity Day on the mind as well. Each one will create a symbol or design that stands for the word unity, which will then become part of a patchwork quilt. Kruse said the designs for those should be in by next week, and the quilt will hopefully be finished by the end of the month.

As to the problem itself, she said it can be difficult to tell when bullying is taking place in the school environment if the victims don’t come forward.

“Bullying isn’t necessarily something that’s apparent to everybody,” Kruse said.

While physical bullying is easy to identify, other forms can be more personal and less visible to the unsuspecting bystander, she added.

Right now, students are filling a climate survey, which includes a question on whether bullying is an issue at the school. The results are still coming in, but Kruse said the majority of responses so far show students don’t see bullying as an issue. But there’s still a portion of students affected.

“The students have taken this societal issue and are working hard with the staff to aid those that feel alone and picked on,” said Principal Jim Wagner. “I am confident that with the plans and expectations in place, the amount of bullying will continue to go down as the awareness goes up.” 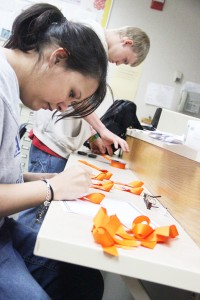 Unity Day is part of a nationwide effort sponsored by PACER’s National Bullying Prevention Center. On a national level, bullying affects a large share of children, according to the center’s Director Julie Hertzog.

“Nearly one-third of all school-aged children are bullied each year — upwards of 13 million students,” Hertzog said in a news release. “We need to show these students they are not alone.”

While this is the first year Albert Lea High School will take part in PACER’s Unity Day, the topic of bullying prevention has already played an integral role in the school’s curriculum. During a period called Respect Week last year, students in advisory periods honed in on what issues they were seeing at the school. They watched short videos and had discussions about bullying, among other subjects. 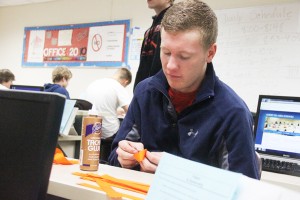 Students glued pieces of orange ribbon together, painted unity on them, and then put pins on the ribbon to be worn on their clothing. Senior Trevor Herfindahl is seen gluing ribbon together.

Kruse hopes to partner in the future with community groups outside the high school to strengthen the anti-bullying message. But for now, Albert Lea High School is her focus. As equity leader, it’s Kruse’s domain to discuss social issues in the school and to “help students just be more aware of what’s around them.”

For bullying, that means hanging the Unity poster and the patchwork quilt where students can see them on a regular basis, to keep the message fresh even once October has come and gone.

“It’s not something that just occurs in one month,” Kruse said. “As schools, we really have to be proactive all year long.”