Eileen Lorraine Stoen-Jacobson, 86, of Wells, died Monday, Oct. 29, 2012, at St. John’s Lutheran Home in Albert Lea. A funeral service will be at 11 a.m. Thursday at United Methodist Church in Wells with the Rev. Paul Woolverton officiating. Visitation will be held two hours prior to the funeral service at church. Interment will follow the service in Rosehill Cemetery in Wells. Please see www.brussheitner.com to leave online condolences. Bruss-Heitner Funeral Home in Wells is in charge of arrangements. 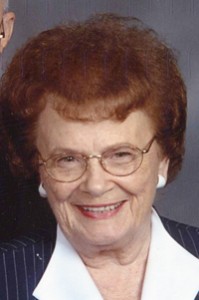 Eileen L. Stoen-Jacobson was born on Feb. 17, 1926, to Ralph and Jesse (Nixon) Burns in Wells. She graduated from Wells High School in 1943 and was a drum majorette for the Wells High School marching band. She also competed in the county fair. Eileen worked for Musser and Company during World War II. She later became a legal secretary and worked for the Wells Law Office for 40 years. Eileen started the Older Adults (Awesome Adults) Club at the United Methodist Church in Wells. Eileen enjoyed her card club, fishing, gardening, shopping and camping and was very proud of her rose and hibiscus garden. She was an artist of acrylic painting and was an excellent baker of banana bread and apple pie. In her later years she enjoyed going to movies with Wally and they were also avid Twins fans. She was regularly seen tending to the birds and squirrels in her yard.