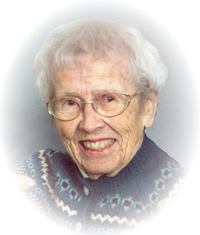 Funeral service will be at 11 a.m. today at Trinity Lutheran Church in Blue Earth with the Rev. Dr. Mark Wilms officiating. Visitation was from  5 to 7 p.m. Monday at Jacobsen & Winter Funeral Home in Blue Earth.

Jacobsen & Winter Funeral Home in Blue Earth is assisting the family with arrangements. Online condolences can be left at www.winterfuneral@bevcomm.net.

Elizabeth Johnson Kegel was born Jan. 23, 1922, to Carl and Aslaug (Morland) Johnson on their farm near Twin Valley. She was raised on that farm and learned to speak Norwegian before English as that was what was spoken in their home.

In 1928 she took her first trip to Europe to meet her grandparents and extended family. She attended Herberg School through the eighth grade; this was a one room school building a mile from her home. Liz started high school at Twin Valley in September 1935 and graduated in 1939. Liz took all the mathematics and science courses she could as those were the most interesting to her. She was also the valedictorian of her class. Liz attended Concordia College in Moorhead and graduated in 1943 with a Bachelor of Arts degree. She took her first teaching job in Breckenridge and then taught on Iron Range and Detroit Lakes where she met Wesley Kegel.

The couple was married on June 16, 1951, and was blessed with two daughters. In 1954 the family moved to Blue Earth and Liz taught math in Elmore until retiring in 1985. The couple also bought and operated the Coast to Coast Store in 1954.

Liz enjoyed traveling in her motor home, playing bridge and hearing from former students. She especially enjoyed spending time with her grandchildren and great-grandchildren.

She was a long time member of Trinity Lutheran Church.

Liz had a great appreciation for Mayo Clinic in Rochester. She has chosen to donate her body to their anatomy program.