Erdine E. Knutson, 92, of Brownsdale, died Monday, Oct. 1, 2012, at Mayo Clinic Health System in Austin. Erdine Eleanor Gunderson was born July 30, 1920, in Olmsted County, to Carl and Gertrude (Martin) Gunderson. She attended school in Sargeant. On June 20, 1941, Erdine married Henry A. Knutson Jr. at Evanger Lutheran Church in Sargeant. Because two people fell in love, there are seven children from this marriage, 26 grandchildren, 22 great-grandchildren and one great-great-grandchild, totaling 74 immediate family members. The couple was married for 63 years. Erdine was a lifetime member of Evanger Lutheran Church, where she was an active member of WELCA. Her hobbies were yard work, cooking, entertaining, and serving others. She was a dedicated mother and grandmother. After living north of Dexter and farming with her husband for 56 years, they moved to Brownsdale in 1997. 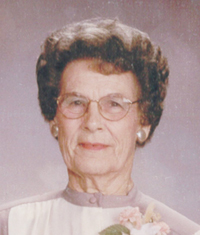 She was preceded in death by her parents, Carl and Gertrude Gunderson; two sisters Harriet and Esther; and her husband Henry (‘Hienie’) in 2004.

Erdine was a true caregiver and faithful friend.

Funeral services will be at 11 a.m. Saturday at Evanger Lutheran Church in Sargeant with the Rev. Dwight DoBell officiating. Friends may call at the Worlein Funeral Home in Austin from 4 to 7 p.m. Friday and one hour prior to the service at the church on Saturday. Interment will be in Evanger Lutheran Cemetery. Memorials can be directed to Evanger Lutheran Church, the American Cancer Society or the recipient of donor’s choice. Condolences may be expressed to the family online at www.worlein.com.