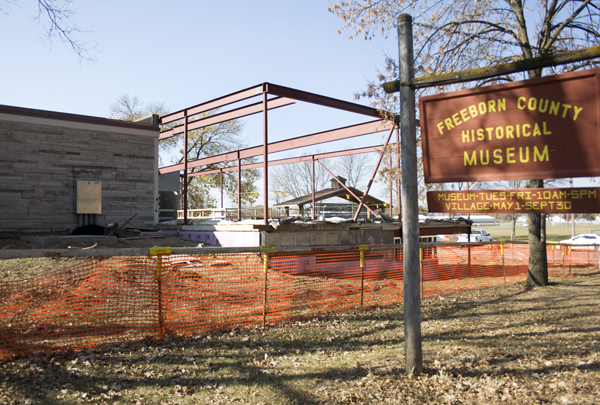 Work is under way on the Freeborn County Historical Museum’s 10,000 square foot addition off of Bridge Avenue. The addition will almost double the size of the museum. -- Sarah Stultz/Albert Lea Tribune

Work is under way at the Freeborn County Historical Museum’s $1.7 million expansion, and the museum’s executive director said $450,000 still needs to be raised to complete the project. 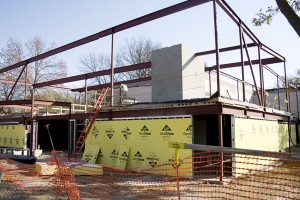 A new elevator shaft is seen on the upper level of the Freeborn County Museum addition on Tuesday.

Plans for the expansion include a two-story, 10,000-square-foot addition, which almost doubles the museum’s size. When completed, it will include an expanded museum library, meeting rooms, a children’s learning lab, additional restrooms on both levels, an elevator and a new entrance and reception area.

“It’s really exciting,” said Pat Mulso, executive director of the museum. “You visualize it in your mind and in the drawing, but when you go and stand in it and see it, it’s really exciting to see it take shape.”

She said all of the outside walls and the roof are expected to be in place by December, along with the installation of the plumbing and electrical. Work has been contracted out to Larson Contracting.

The additional $450,000 still needed to be raised will go toward finishing the interior of the building.

Mulso said she hopes people will get excited to see the project move forward and contribute — whether through monetary or in-kind donations.

“The quicker we can raise the money, the less it’s going to cost,” she said. “Every donation is important, large or small, to make it happen.”

Mulso said she has been working toward the project since she started at the museum in 2005, and the museum contracted with an architect in 2009.

In 2011, the organization focused on fundraising, and museum supporters broke ground for the expansion during a ceremony in May. Crews began work at the end of July.

Mulso said she is excited about the opportunity to showcase some items that have been in storage and believes the addition will be a nice addition to the city. She said she is also pleased items will no longer have to be turned away from the public.

The museum is visited by people from 35 to 40 states and 10 to 15 foreign countries each year.

For more information or to make a donation, contact Mulso at 373-8003 or stop by the museum at 1031 Bridge Ave. The museum is south of the Freeborn County Fairgrounds.