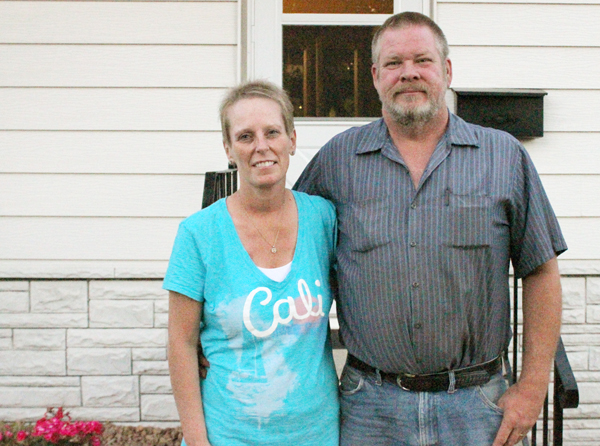 Barbie and Mark Haeska stand in front of their home in Albert Lea. A benefit is being held for Barbie on Saturday at the Moose Lodge in Albert Lea; she found out she had colon cancer in February and has just finished her chemotherapy treatments. -- Kelli Lageson/Albert Lea Tribune

A routine colonoscopy became a life-changing experience for an Albert Lea woman.

Barbie Haeska, 52, found out on Feb. 7 that she had a tumor inside of her colon the size of a fist. She’d never had any side effects, but the doctors estimated the tumor had been growing for six to eight years.

Unfortunately, the cancer had spread to her lymph nodes, which meant she needed surgery and chemotherapy. The news was especially tough on her family because she had just dealt with a tough bout of cellulitis the month before. Practically one of the only positive things about the experience was that she was able to be treated mostly at Mayo Clinic Health System in Albert Lea’s own Cancer Center.

“I’ve really liked the convenience of having it there,” Barbie said.

Since her diagnosis she’s had four surgeries, 36 chemotherapy treatments, two CAT scans, two PET scans, two colonoscopies and numerous blood tests. Much of the testing was down in Rochester. Just last Friday she completed her 36th and last chemo treatment, and if all goes well during testing in November she will be unofficially cancer-free.

“I’m just starting to get my hair back,” Barbie said.

Barbie’s husband of 31 years, Mark, has been her main caretaker and has helped her through the ups and downs of the ordeal. Her in-laws and friends have also provided much-needed support in many ways.

Co-workers and close friends are even planning a benefit for this Saturday. The Haeskas said at first it was tough for them to agree to hold the benefit because they’re used to taking care of themselves.

“We thought long and hard about it, because we’ve got a lot of pride,” Mark said.

After more prodding from friends and co-workers, the couple agreed to the benefit. Barbie, who has worked at the Albert Lea Family Y for more than 17 years, said co-workers Robyn Sailor and Dennis Dieser were instrumental in planning the benefit. Mark’s sister, Mary Wendelboe, and friend, Debbie Beighley, are also helping plan the event.

“They said ‘We’re here to do something for you,’” Barbie said. “I don’t really know what to expect.”

She said she’s most excited just to see everyone who comes. The benefit is from 3 to 7 p.m. Saturday at the Moose Lodge. The Haeskas also said both of their workplaces have been incredibly supportive throughout the months of treatment they’ve endured.

Barbie was able to work from home and take off as much time as she needed from the Y. Mark, who works for the city of Albert Lea at the Wastewater Treatment Plant, said his supervisor has also been supportive. When he goes to treatments with Barbie he’s able to work full-time hours whenever he can fit them in.

Barbie’s cancer is stage three, meaning it is treatable. The diagnosis gave the couple a reality check, though, because though it was treatable, it meant there was a long road ahead. After surgeries and chemo treatments, Barbie has just a 20 percent chance the cancer will return. If she had opted not to do chemotherapy, it would be a 45 percent chance of cancer returning.

Through all the treatments, testing and side effects, the couple has new priorities and values. No longer do they care as much if the grass is mowed or the dishes are all cleaned.

Chemotherapy side effects made their life quite different. Through hair loss, nausea, fatigue and just general melancholy, Mark always knew the one thing that could make Barbie smile — a visit from the grandkids.

Their daughter Jenny Hrdalo, and husband, Micah, could bring over Mason, who’s almost 3, and baby girl Charley to brighten Barbie’s day. The couple affectionately call them the grandcritters. Visits from their son, Adam, were also treasured. And while Barbie has a great support system, the one who’s been by her side for the entire ordeal is Mark.

The next steps are another PET scan and colonoscopy in November to see if the chemotherapy was successful. If all goes well she will continue to have frequent tests for the next five years to monitor her health. Only after five years of clean tests would she be considered cancer-free.

Her appetite is finally returning, and she’s looking forward to being done with the side effects of chemotherapy. Both Barbie and Mark said they commend the hospitals in Albert Lea and Rochester for their attentive care over the last few months. From doctors to nurses to volunteers, the couple felt like they had their questions answered and all the help they needed during the entire ordeal.

Livelihood: She is employed at the Albert Lea Family Y.

Interesting fact: Barbie enjoys walking and reading and spends much of her free time with her two grandchildren.

What: Benefit for Barbie Haeska

More information: The event will include a silent auction, live auction, bake sale and hamburger and fries basket for a $7 donation.