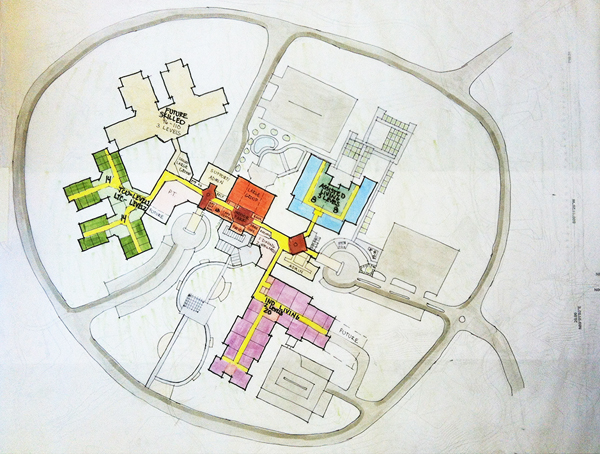 Plans for the St. John’s Lutheran Home expansion include buildings for nursing home patients, along with separate assisted-living and independent-living facilities, joined by a community center in the middle. -- Submitted

St. John’s Administrator Scot Spates said Tuesday if all goes according to plan, construction will begin the summer of 2013 with an anticipated opening in the first quarter of 2015.

Plans include not only a new nursing home but also an assisted-living complex, an independent-living complex and even senior duplexes.

“The feedback from the community has been very positive,” Spates said.

The nursing home, assisted-living complex and independent-living complex will be joined in the middle with a town center, which offers services including an activity room and chapel, a barber and beauty shop, a coffee shop, a technology center and a fitness center, among other amenities. The town center will overlook Edgewater Bay.

“The reason we bought the land was we want to be able to offer a full range of services to seniors,” Spates said. 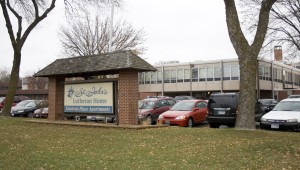 St. John’s purchased the 51 acres of property — known by many Albert Leans as “the back nine” — in Dec. 2010 from American Bank of St. Paul for $7,200 per acre. The land had been in the hands of the bank after it was surrendered by commercial developer Scott LaFavre following the property’s foreclosure.

Spates said at St. John’s current campus, east of Minnesota Highway 13, the building is landlocked and said it doesn’t offer assisted living. If the company wanted to expand there, it could not do so.

In the last few weeks, the St. John’s board and Horty Elving have been developing a master plan for the property and talked about where specific buildings will go.

Spates said during the first phase of the project, the company would move 84 of the nursing home patients from the current site to the new facility, and 79 licensed beds would stay at the current site.

The nursing home would be a three-level building, and the main level would provide short-term or transitional care.

Spates declined to give an estimated cost for the new facilities.

The 48 Knutson Place apartments and 19-owner occupied condominiums will not be moved.

Spates said St. John’s is working to get permission from the state to relocate the nursing home and hopes to hear back by March 2013.

In the meantime, St. John’s has been meeting with city officials to discuss options for sewer and water infrastructure.

The second phase of the project would move the remainder of the nursing home patients to the new site and expand the town center.

What will happen with the vacated main facility is still unknown.

Spate estimated when the project is completed there will be between 25 and 30 additional employees on top of the 280 currently employed.

St. John’s Lutheran Home opened its doors to residents in January of 1962. It is celebrating its 50th anniversary this year.