Funeral services for Hazel Bernice (Andersen) Doyle will be at 11 a.m. Saturday at Bayview/Freeborn Funeral Home, Albert Lea, with the Rev. Kent Otterman officiating. Visitation will be one hour prior to the service. Burial will be at St. Theodore’s Cemetery, Albert Lea. To sign the guestbook go to www.bayviewfuneral.com. 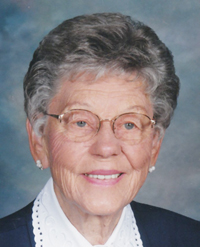 Hazel was born Dec. 5, 1917, in Worth County, Silver Lake Township, Iowa. She died on Sunday, Oct. 7, 2012, at St. John’s Lutheran Home, Sheltering Arms Unit, in Albert Lea at the age of 94. Her parents were Lionel and Alvilde (Petersen) Andersen. Hazel grew up on a farm in Freeman Township near Twin Lakes. She was baptized at home and confirmed at Round Prairie Lutheran Church, Glenville, and graduated from Albert Lea High School in 1935. She attended Mankato State College for two years and taught elementary school for three years in a one-room schoolhouse. She then attended Mankato Business College and worked in the office of George A. Hormel Meat Packers in Austin for two years.

She married Robert F. Callahan at Queen of Angels Catholic Church in Austin in 1942. From this union she had four children, Karen, David, Matt and Mark. They were divorced in 1955. In 1974 she married Thomas P. Doyle in Las Vegas, Nev.

Hazel worked for 24 years in the office at Wilson & Co. After retiring in 1981 she delivered Winnebago motor homes for about 17 years. While she lived most of her life in and around Albert Lea, she lived in San Francisco, Calif., three years during World War II. She loved to travel and in addition to visiting most of the Continental United States, Alaska and Hawaii, she traveled to Canada, Mexico, England, Europe, Iceland, Australia and New Zealand. These travels earned her the nickname of “Ramblin’ Rose” from her husband Tom. Hazel was a member of the Freeborn County Historical Museum and the Shades of Jade Garden Club. She always loved animals and small children, especially babies.

In lieu of flowers, memorials may be sent to the Freeborn County Historical Museum’s Building Fund or donor’s choice.