Funeral services for Helen Margaret Nelson of Albert Lea will be at 10:30 a.m. Monday at Ascension Lutheran Church in Albert Lea. The Rev. Mark Boorsma will officiate. Interment will be in Graceland Cemetery, Albert Lea. Visitation will be from 4 to 7 p.m. Sunday at Bonnerup Funeral Service, and one hour before the service at the church. 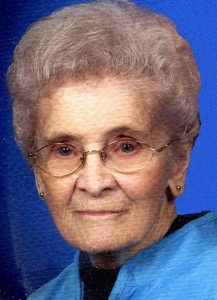 Helen was born on Dec. 8, 1917, in Albert Lea, the daughter of Jens and Marie (Jensen) Levisen. She graduated from Albert Lea High School with the class of 1937. She married Norval Nelson on June 1, 1939. Together Helen and Norval raised their family and farmed, first in the Freeborn area, and then north of Albert Lea since 1942. Helen was baptized, confirmed and married at Trinity Lutheran Church. She was currently a member of Ascension Lutheran Church. Helen enjoyed being active in church activities which included Bible studies, Ladies Aid, quilting and in earlier years teaching Sunday school.

She always enjoyed her neighborhood birthday club gatherings. She and Norval enjoyed spending their winters in Arizona for 31 years. In 1980, Helen and Norval took a trip to Norway and Denmark, the lands of their forefathers. They met many cousins and relatives, it was truly a memorable experience.

Helen’s life centered on faith and family. She always put other others first, and so enjoyed keeping up on the lives of her children, grandchildren and great-grandchildren.