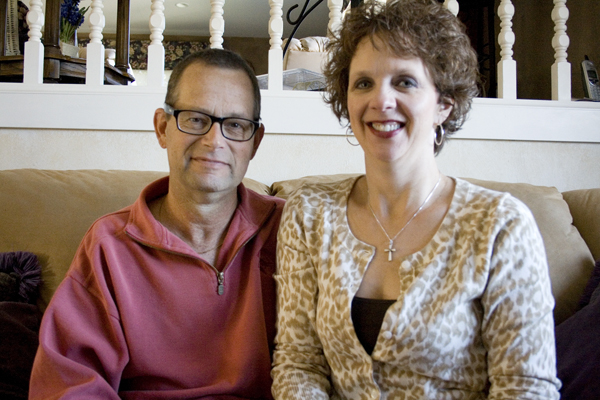 James and Tina Stripe, of Richway Drive, were the recipients of a new Lennox furnace Saturday through a program called Heat Up Minnesota. -- Sarah Stultz/Albert Lea Tribune

An Albert Lea husband and wife, both battling cancer, are sharing a word of thanks this week after they were awarded a new furnace Saturday.

As part of a program called Heat Up Minnesota, crews with Johnson Heating & Air Conditioning and Albert Lea Electric installed the furnace for the family of James and Tina Stripe. The furnace was donated by Lennox.

The Stripes are just one of 60 families across the state receiving new furnaces with the program.

“This is truly what a community is about,” said Nikki Schumaker, office manager of Johnson Heating & Air Conditioning. “It’s neighbors helping neighbors when people need help.”

She said Lennox put out advertisements asking for nominations, and then a board reviewed the nominations and selected the families. Three families were nominated in the Albert Lea area.

“James and Tina are wonderful people,” Schumaker said. “They would help anyone that would need help, so when we got word that it was them that was receiving, it made me feel good because they’re a wonderful family.”

The lives of the Stripes were turned upside down in September when in a matter of four days James and Tina both found out they would be battling cancer.

For Tina, 49, who works at America’s Best Value Inn, it was breast cancer discovered during a routine mammogram.

For James, 52, who works for a trucking company out of Hollandale, it was a spot found on his lung that is believed to be tied to a previous bout of colon cancer.

“Your whole life just hits you in the face,” Tina said. “It was a pretty overwhelming weekend.”

“At this time in our life, what a blessing it is to receive this,” Tina said. “It’s an amazing blessing.”

“We’ve always tried to help people when things come up,” James added. “We’ve tried to help out when we can. To find yourself on the other side of it is pretty humbling. We’re very grateful to a lot of different people.”