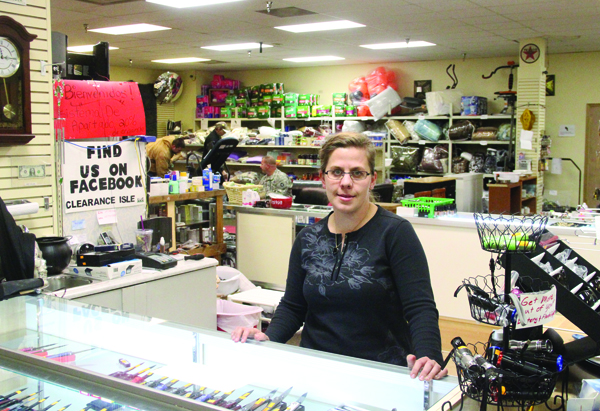 Lisa Wick, owner of discount retailer Clearance Isle, stands behind the counter. The store recently expanded to a second storefront in the mall and increased its hours. -- Kevin Coss/Albert Lea Tribune

Lisa Wick dodged around a furniture display and hurried past shelves of scary masks. A moment ago, her discount retail store had been quiet. Now, customers were leaning against the counter and the phone was ringing off the hook. 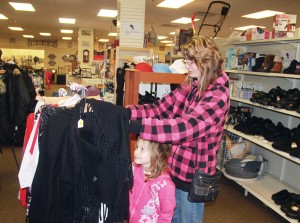 “It comes in waves,” she explained, pulling away to address her customers.

Wick’s store, Clearance Isle, is boasting expansions in two senses of the word. The Northbridge Mall retailer recently grew to include a second storefront next to its original entrance and is now open every day of the week.

The changes are fitting, as the store approaches its first milestone in Albert Lea.

“We’re coming up on our one-year anniversary,” said Wick.

The store started in Lake Mills in August 2010. Slightly more than a year later, Wick opened up her Albert Lea shop in Northbridge Mall. A bigger town looked more attractive, she said. Many of the store’s customers regularly drove through Albert Lea anyway, so she wasn’t worried about losing business.

For a while, Wick kept both locations running. That changed in February this year, when the Lake Mills store closed down.

“It just made more sense to only run one,” Wick said, noting how much effort it took to manage two stores.

Clearance Isle holds all manner of goods, from school supplies to clothing to tools, marked down from their original prices. Shipments arrive on irregular schedules, and Wick typically doesn’t know what’s on its way until it arrives. What customers find on the store’s shelves is always changing, since all the products are overstock product from different national retail stores.

On Oct. 1, the store dropped its four-day week of Thursday through Sunday in favor of being open seven days a week. Wick said the mall had encouraged her to expand her hours, and so far, customers have approved. Those of them who have found out, that is.

“It’s kind of hard to judge what the middle of the week is going to do,” Wick said, explaining fewer than two weeks have passed since the change and word is still getting around.

Since the store first opened in Lake Mills, Facebook has served as its main link to customers. Employees keep the site updated with photos of new merchandise, details on upcoming sales and answers to questions from Facebook users. Earlier this week, one user inquired about toddler beds. Last month, a different person asked after a basketball hoop.

“You can’t really beat it with any other medium,” Wick said.

The store’s clientele varies depending on what it has in stock. Most common are young families who are just starting out, or college students who need furniture and supplies for their new living space. Apart from Wick and a full-time manager, the store has five part-time employees.

Wick said the recent changes at Clearance Isle are making its first anniversary in Northbridge Mall a satisfactory one.

“We’re pretty happy with it,” she said. “It’s pretty much what we were expecting.”