Funeral services for Jewell Thompson, 99, of Albert Lea will be at 2 p.m. Saturday at the First Lutheran Church in Northwood, Iowa. The Rev. Wayne Hagen will officiate. Interment will be at Hillcrest Cemetery at a later date. Visitation will be from 5 to 7 p.m. Friday at Bayview/Freeborn Funeral Home and one hour prior to the service at the church. Online condolences are welcome at www.bayviewfuneral.com. 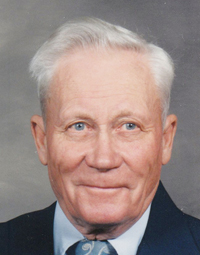 Jewell Thompson was born Dec. 22, 1912, on the Haugerud Farm in Silver Lake, Iowa, to Jul Marthinius and Inger (Haugerud) Thompson. For his first 12 years Jewell grew up by Silver Lake and went to country school and the next eight years he grew up west of Northwood. Jewell was baptized and confirmed at Silver Lake Lutheran Church. He was united in marriage on Jan. 9, 1936, to B. Lillian Holstad in Hampton, Iowa. They were married for 71 years. Jewell spent many years farming and bought the farm near Myrtle in 1948, he farmed there until 1975. In 1979, Jewell and Lillian moved to Albert Lea. He was a member of First Lutheran Church of Northwood and the Eagles Club in Albert Lea. Jewell liked to listen to the Minnesota Twins, farm news and weather. Jewell and Lillian enjoyed vacationing in their motor home and taking the grandchildren along. In pastimes Jewell would tell stories of his childhood and being a hired man for the first six years of his married life. Jewell enjoyed playing cards and telling jokes to family and friends, most of all he enjoyed making others laugh.  We will miss his great humor.

Jewell was preceded in death by his parents; wife, Lillian; brothers: Arnold, Glen and Clifford; and many aunts, uncles and cousins.