June Ardith Bauman, 71, of Austin, died Friday, Oct. 19, 2012, at St. Marys Hospital in Rochester. She was born June 30, 1941, in Cresco, Iowa, the daughter of Lloyd Henry and Pearl Luella (Knutson) Fenske. She attended school in Cresco, before attending Austin Vo-Tech for cosmetology. She worked as a hairdresser in Austin at Austin Beauty Shop and South Side Beauty Shop. On Dec. 26, 1980, she was united in marriage to Warren Lee Murphy in Austin. Warren died on Feb. 4, 1996. June also worked for Kmart for 21 years until her retirement. During her retirement, June babysat for friends and family. On June 30, 2001, she married George Blade in Austin. He died on July 13, 2005. June enjoyed doing crafts, scrapbooking, crocheting and tending her flower garden, until her health made them difficult to do. On June 21, 2008, June married Joseph Bauman in Albert Lea. 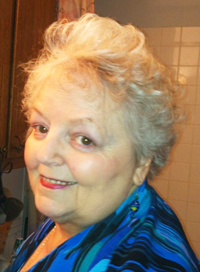 June wrote, “My greatest gifts from God are my daughter and son-in-law, my three granddaughters and my three precious great-grandsons.”

She was preceded in death by her parents; husbands Warren Murphy and George Blade and two brothers Bobby and Tommy Fenske.

Funeral services will be at 2 p.m. Wednesday at Worlein Funeral Home Chapel with the Rev. Jeff Forbes, officiating. Interment will follow the service at Oakwood Cemetery. Visitation will be from 5 to 7 p.m. Tuesday and for one hour prior to the service on Wednesday at the Worlein Funeral Home in Austin. Condolences may be expressed to the family online at www.worlein.com.