Friday nights and Saturday mornings at Holiday Lanes have been buzzing with a younger crowd for the last month.

The bowling alley has been hosting the 8 for 8 Bowling League since the end of September and Loren Kaiser, the manager, said there will probably be another round of it starting in November. 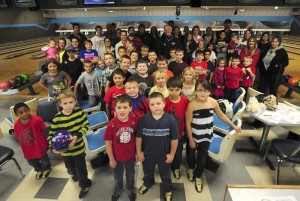 The 8 for 8 league allows kids to bowl for $8 a week for eight weeks. Each week the session goes for an hour and a half and after the eight weeks are up, kids receive their very own bowling ball.

Kaiser said the current league has about 43 kids bowling and is being sponsored by McDonalds.

Through the sponsorship, Happy Meals and ice cream cones are given away as prizes.

“Last year we had three leagues of youth,” Kaiser said. “Now, we have seven all together.”

Besides the free bowling ball, by joining the league kids will get a one year United States Bowling Congree youth membership, a USBC recognized average, eligibility for tournament competition and league award emblems.