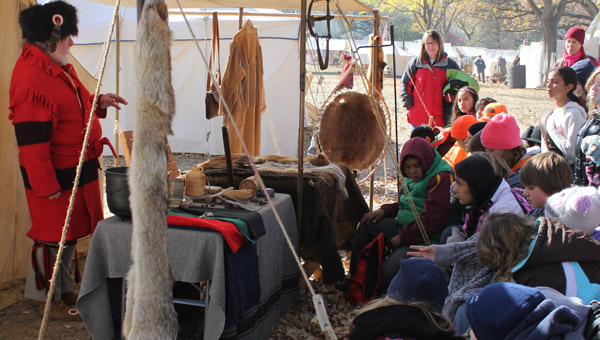 From candlemaking to fur trading to ax throwing — students were learning many different facets of the lives of early settlers at Education Days at the Big Island Rendezvous. 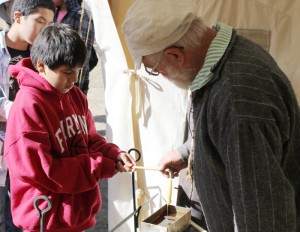 Art Briant, of Portage, Wis., helps students from Fairmont make their own candles by dipping them into wax. Students from schools all over the state got to try many different things at Education Days at the Big Island Rendezvous Friday. -- Kelli Lageson/Albert Lea Tribune

Middle-schoolers were excited to learn the art of candlemaking from Rita and Art Briant, of Portage, Wis. The couple have been coming to the Rendezvous for 19 years and enjoy teaching youngsters the ins and outs of creating candles.

“The kids get to make them and take them with them,” Art said.

They explained to the students how to get the beeswax and that it takes around 30 to 40 dips to make a whole candle. Each student gets to make their own candle and take it home, but on Saturdays and Sundays the couple charges $1.50 for the public to make candles.

Education Days is always the Thursday and Friday before the weekend Rendezvous festival at Bancroft Bay Park in Albert Lea. Students from all over the state visit the Rendezvous to receive special presentations. 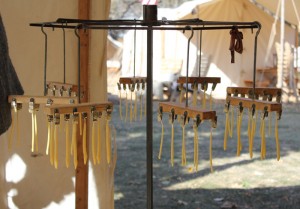 Pre-dipped wicks stand ready to be made into candles at a stand at the Big Island Rendezvous. -- Kelli Lageson/Albert Lea Tribune

A sixth-grade teacher, Janece Birch, was a chaperone Friday for students from Southwest Middle School. She said her group of students was scheduled to see a blacksmith, the New Ulm Battery, a shoemaker, gravedigger and other presenters.

“It’s such a great experience for our sixth-graders,” Birch said. “Their questions have been good and thoughtful.”

Birch said that while students can come with their families on the weekend, presenters give longer and more in-depth demonstrations on Education Days where there are scheduled times each group will come by. 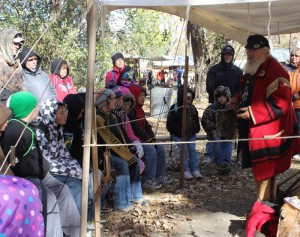 He said it’s a big surprise when he tells them that fashion was a big cause of westward expansion. He tells them that furs became fashionable to wear in Europe and so trappers were able to find many buyers for the pelts they found.

Uebe show students the traps and then explains how to skin the animal and stretch and dry the hide to preserve it. He said the students are usually most interested in the traps. Uebe also trys to impress on the students how the history relates to today and that they should talk with their grandparents who are full of history lessons. 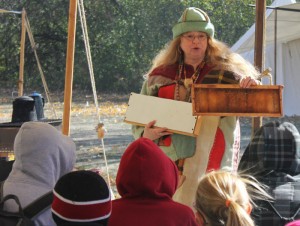 The Big Island Rendezvous is in its 26th year, and Education Days started about 23 years ago. Almost 75,000 students have attended Education Days since the event started. There were around 50 presentations this year for classes to visit.

Perry Vining, founder of the Big Island Rendezvous, said students stay for the entire day, arriving anywhere from 8:30 to 10 a.m. and staying until 3 p.m. Most students are in fifth or sixth grade, but there are groups as young as third grade. There is no live entertainment on Education Days, but the entertainment is added for the public on Saturday and Sunday of the event. The festival was open from 9 a.m. to 7 p.m. Saturday and 9 a.m. to 4 p.m. today.