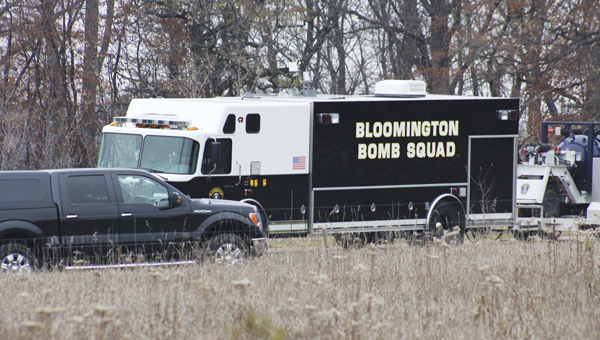 The Blooming Bomb Squad was parked Monday afternoon near a home where a man suffered injuries early Sunday from an explosion. -- Tim Engstrom/ Albert Lea Tribune

A local man is in critical condition after an explosion early Sunday morning in the basement of his home on Albert Lea Lake. 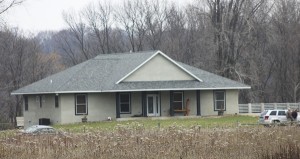 The home of Ron and Cathy Rofshus is at 18115 Pelican Road on the southeast shore of Albert Lea Lake, near where Freeborn County Road 19 heads straight east and the shoreline goes northward.

Freeborn County Sheriff Bob Kindler said Ronald Irvin Rofshus, 48, sustained a severe injury to his left arm and was transported by ambulance from his home to Mayo Clinic Health System in Albert Lea. From there, he was taken to the Hennepin County Medical Center in Minneapolis.

Kindler said Rofshus was working with explosive chemicals in his basement at 18115 Pelican Road, near where South Shore Drive splits from the shore, when the chemicals ignited at about 12:15 a.m.

Kindler said authorities are still investigating the incident and trying to figure out what Rofshus was doing prior to the explosion. On Monday afternoon, a Bloomington Bomb Squad truck could be seen outside the residence, and Sheriff’s Office deputies blocked the road near the house.

He declined to release any further information as the incident was being investigated.

Rofshus is part owner of Rofshus Precision Machine, a manufacturer of plastic moldings. The business is at 1701 Margaretha Ave. in Albert Lea. His wife, Cathy, is a former Tribune reporter who is now employed by the Minnesota Pollution Control Agency.