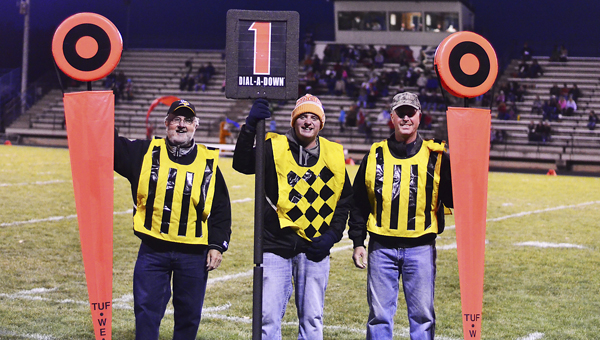 When most people go to a high school football game, they don’t usually pay much attention to the guys who move the chains throughout the game.

These guys are known as the Chain Gang, and move up and down the visitor’s sideline the entire night to assistant linesman in measuring first downs and keeping track of the downs. 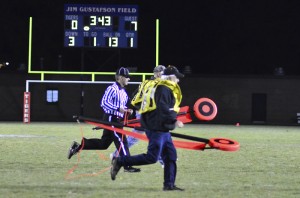 The Chain Gang runs after getting called onto the field for a first down measurement at Wednesday night’s varsity football game.

If one happened to be pay attention over the last 45 years, they might have noticed something that has remained a constant in those years.

One thing that has always been at the Albert Lea home football games since 1968, is Bill Intihar. Intihar is a retired teacher from Albert Lea. He taught for 34 years.

“I started in the fall of 1968,” said Intihar. “I knew Tom Mattson and Stan Breckner, and a spot had opened up on the crew.”

Breckner, at the time, was in his 23rd year as the man in charge of the down marker. Mattson was only in his fourth year on the Chain Gang. Intihar was the rookie.

Intihar remembers when he arrived in Albert Lea in 1966 the football field used to be at Lakeview Elementary School.

“I think that Hammer Field opened up in 1967,” said Intihar.

If you do the math, Intihar has been at Hammer Field which recently changed to Jim Gustafson Field, for all but one year of its existence, moving chains for the Tigers.

“Let’s just say that I have seen a lot of wins and losses,” said Intihar.

From 1968 to 1971, Intihar witnessed some great teams coached by Gustafson in which three of those teams won state titles. The teams haven’t been too strong in the last few years, but Intihar isn’t caught up in all of the stats. He said he shows up on Friday nights basically to just get out and enjoy the outdoors and take in a game.

“The weather has been great,” said Intihar. “I can only think of maybe a half dozen nights where it’s been cold and rainy.”

This year Intihar is working with two rookies on the Chain Gang. Steve Anderson joins Intihar on the chains, and Brock Sorenson mans the down marker. In the past, it used to be the same guysyear in and year out.

“It seems like nowadays, there are one to two changes a year on the crew,” said Intihar.

In 45 years, Intihar has seen a lot of changes in crew members, coaches, officials, equipment and rules. But the one thing that hasn’t changed is his job on the Chain Gang.

“Ten yards is still 10 yards,” said Intihar. “Our markers might be different, but that’s about it.”

Another interesting fact is that Intihar has never been injured by a player going out of bounds, which can happen at any given time. The game is very fast and can be dangerous when standing right on the sidelines.

“It’s been close,” said Intihar. “I’m pretty alert when it comes to that.”

Intihar doesn’t know if he will make it to 50 seasons, but he plans on being on the Chain Gang until he is unable to do the job.