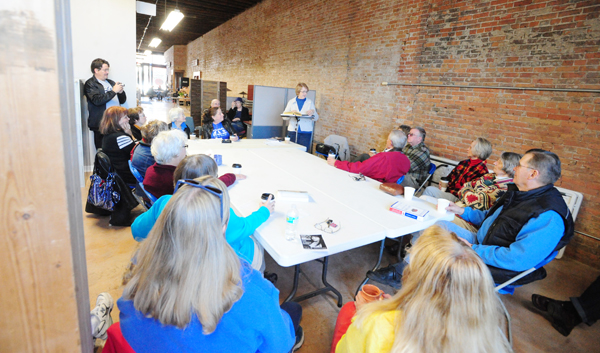 Area residents gather Friday at Prairie Wind Coffee to preview the The Met: Live in HD’s “L’Elisir d’Amour” that was played Saturday at the Marion Ross Performing Arts Center. Operas will be simulcasted through April. -- Danielle Boss/Albert Lea Tribune

The snickers and smiles of Albert Leans gathered at Prairie Wind Coffee determined one thing: a popular Italian opera farce is no less amusing today than when it was written in the 1800s. 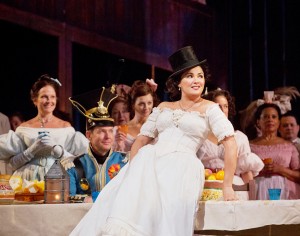 About 25 people filled the back of the coffee shop around noon Friday to discuss the opera they would watch simulcast live from New York’s Metropolitan Opera, “L’Elisir d’Amore” — or, “The Elixir of Love” — by Donizetti. The meeting was a way to informally prepare for watching the opera on Saturday.

“It’s a gathering of people who are interested in the opera,” organizer Eileen Nelson Ness said before the event. “I’m going to give them the story, talk a little bit about the singers.”

She summarized the plot of the opera, wherein a young lovesick peasant named Nemorino vies for the affection of Adina, a rich land-owning maiden with a flirtatious personality. When Adina won’t give him the time of day, Nemorino resorts to purchasing a “love elixir” from a deceptive physician. Events get out of hand as the peasant swills the potion, which is actually red wine, and believes the medicine worked. 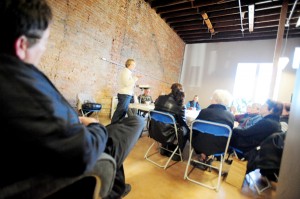 Area residents listen to Eileen Nelson Ness as she gives a preview of the opera “L’Elisir d’Amour” played Saturday at the Marion Ross Performing Arts Center.

“It just continues to mushroom,” Ness said, explaining the comical plot to laughs from her audience.

Attendees Friday ranged from connoisseurs of the medium to those who had never seen an opera before. And while the first showing was a good turnout, she said it could change going forward, depending on the particular opera.

Ness played some samples of the arias — long solos sung with an accompaniment — the opera’s viewers could expect to hear, and what the characters were singing about. The actual viewing would be in Italian with English subtitles.

Many people today think operas to be a difficult medium to approach, Ness said, but they often don’t realize they carry the same attractions as movies. Love, hate, passion and war are regular themes. The biggest difference is the actors’ performance comes through live rather than through a recorded and edited film reel.

The Elixir of Love was a particularly good opera to start with, she said, since it’s an opera buffa — a comedy opera. Compared to other operas, the plot is lighter-spirited and not as serious. 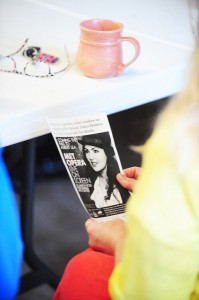 A woman holds a flyer that lists all the operas to be featured on Saturdays at the Marion Ross Performing Arts Center.

“I think it was very worthwhile,” said Ann Berry, who sat at Meet the Met. “It makes me a little more excited.”

Berry said she had read descriptions of the music and was delighted to get a taste of how it would sound before going to see the opera itself. She thought the coffee shop meeting would help her appreciate the performance more.

The opera viewing itself took place at noon Saturday at the Marion Ross Performing Arts Center downtown. Viewers were welcome to stop by an hour early for a gathering to celebrate the first viewing.

“We’re having a little party prior to that for this one since it’s the first opera,” Ness said Friday.

The celebration recognizes the months of preparation it took to get the opera simulcast to the theater. The Met’s Live in HD series began in 2006 as a way to reach new audiences. It now broadcasts to 1,900 theaters in 64 countries, with 14 theaters in Minnesota.

In February, Ness led a committee’s efforts to get permission to screen the operas. There was an application process, which depended heavily on the Marion Ross theater being a minimum distance from the locations of large movie theater chains.

“You have to be so far away from one of those theaters before they consider giving you permission to show them,” she said.

The facility passed the application phase, and a month or two later became the only independent theater in the state of Minnesota able to show live screenings of the Met Opera.

But the work wasn’t done; there was still the technological aspect to address. The committee spent the summer on equipment upgrades.

“We had to refurbish the theater with a new screen, a projector and satellites,” Ness said.

During intermissions, the theater will show backstage interviews with cast members and may also have light refreshments, she said.

Meet the Met will take place each Friday preceding a Saturday opera. There are a total of 12 operas lined up from October through April. The next one screens Oct. 27, with Meet the Met held the day before. Anyone is welcome to come to future events.