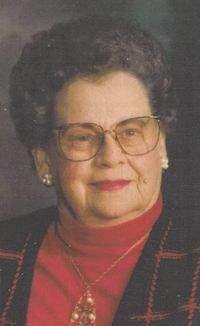 Minnie was born May 1, 1923, on the Helle Farm in Winnebago County, Lake Mills, to Ole and Lena (Turtedahl) Helle. She was baptized at the Lime Creek Christian School on May 20, 1923. She attended the Lime Creek Christian Day School until the fifth grade, when the family moved to rural Lyle. She attended country school at the Nevada and Ames schools. Minnie was confirmed on May 29, 1938, by Rev. William Milbrath at St. John’s Lutheran Church in Austin. She graduated from Austin High School in 1942 and was employed at the Geo. A. Hormel Co. for three years.

Minnie was married to Richard C. Scheffel on June 2, 1943, at St. John’s Lutheran Church in Austin. She and Richard were members of the London Lutheran Church where she served as Sunday school superintendent and teacher. She was an active member of the Deer Creek Valley Lutheran Church of Glenville, where she sang in the choir and was a member of Lois Circle.

Minnie was known as a great cook and her lefse was always in demand during the holidays. She enjoyed having company and serving her good food to friends and family. Minnie and Richard spent several winters as snow-birds with their friends from the London area. She later attended classes to become a home health aide and took great pride in caring for those less fortunate.

In 2002, the Scheffels moved to Austin. They were residents at Pickett Place and the Cedars of Austin until declining health found them living at Fieldcrest Care Center in Hayfield.

Funeral services will be at 2 p.m. Saturday at the Deer Creek Valley Lutheran Church, 87332 Stateline Road, Glenville, with the Rev. Ronald D. Myers officiating. Interment will be at the Woodbury Cemetery in Lyle. Visitation will be from 4 to 7 p.m. Friday at the Clasen-Jordan Mortuary, Austin, and at the church on Saturday from 1 p.m. until the time of the service.