N.R. picker? It would be Wayne Wenzel

Wayne Wenzel opens a door on a nightstand, one of his woodworking projects. -- Buck Monson/Albert Lea Tribune

NEW RICHLAND — Most days for Wayne Wenzel start out at 5 in the morning at his shop in downtown New Richland.

His shop, Dad’s Good Stuff, is a gathering place in this city of 1,200 in southern Waseca County. 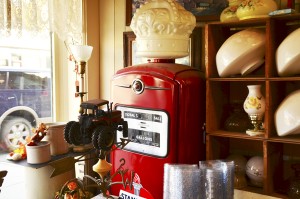 A gas pump that Wayne Wenzel will not sell.

“Every morning we have anywhere from nine to 15 guys that stop in for coffee, cake and whatever else anyone brings with them,” Wenzel said. “Except Sundays. We use that day to take a drive and eat in Albert Lea or Waseca or somewhere else.”

Wayne started collecting kerosene lamps back in the day, and one thing led to another. Now he has anything and everything in his shop. He also does furniture repair and refinishing and is a Pittsburg Paint dealer.

“My wife would like me to sell everything and just do the woodworking part,” he said.

At age 71, Wenzel is still buying stuff and selling it in his store. Most of the stuff he buys is from people bringing in things. He also has people in Wisconsin and Iowa who know what he likes and occasionally bring him things. He used to go to sales and auctions, but things have been slow for the last few years, so he has cut back on that aspect. 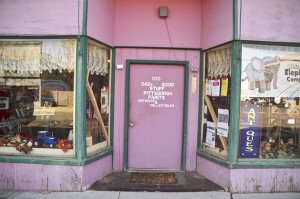 Wenzel was a truck driver for 32 years until a couple of health issues kept him from continuing on the road. While he was driving for those years, he would find things, and throw them in the truck, and bring them home.

“When I got home, the kids always asked my wife where dad was, and she would tell them that I was back with my good stuff,” said Wenzel.

So when Wenzel opened his store in 1991, his daughter suggested that he called it “Dad’s Good Stuff.” They relocated to their current location from across the road in 1995 and have been there ever since.

Wenzel had a bunch of trailers full of stuff, kind of like you see on the television show, “American Pickers,” and the reason he bought the building was to empty the trailers and put it away so they could see what they had.

“We emptied some trailers and people would stop in and want to buy stuff,” said Wenzel. “So, we decided to make it into a store. We were busy right from the start.”

Wenzel says that he has had people from Germany, Alaska, Norway and everywhere in between in his store.

Wenzel is a big fan of “American Pickers” on The History Channel. His grandson sent his name in to the show to be “picked” by hosts Mike Wolfe and Frank Fritz.

“I watch it every week,” he said. “I just really want to meet the guys. I probably wouldn’t want to sell them much of anything though.”

At one point in time Wenzel said he had 14 buildings and a bunch of trailers full of stuff. He recently has narrowed it down to four buildings and a few smaller trailers.

“I don’t know what is in them anymore,” said Wenzel. “I do know that I have some really old gas cans in one location though.”

Wenzel has recently come across some old Mickey Mouse items that range from the 1930s to the 1960s. For those items, he is going to photograph them and put them on the Internet.

There is one thing in the store that is not for sale, and that is an old gas pump that sits in the front of the store. He has had numerous offers ranging anywhere from $2,400 to $7,000.

“When that guy offered me $7,000 for the pump, I said no,” said Wenzel. “Then my wife said we were both dumb, him for offering that much, and me for saying no.”

In his spare time, Wenzel will go to the local race tracks and cheer on his son, Wade, and another New Richland resident, Jason Cummins.

“Wade doesn’t have any sponsors or much money in his car, but Jason is something else,” said Wenzel. “You could give him a 1932 Ford, and he could still win the race.”

Wenzel plans to continue to collect antiques and do his woodwork.

“I still love it,” said Wenzel.