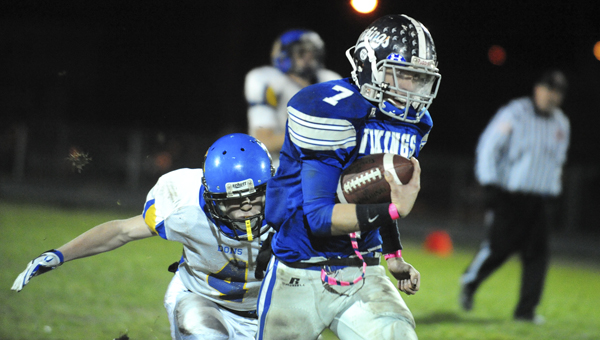 NORTHWOOD — The Northwood-Kensett football team (4-5) knew going in it was going to have a tough final game of the season Friday night against Don Bosco (8-0).

The Vikings kept the score close right away, but Don Bosco ran away with the game 44-12 as the night progressed.

Less than three minutes into the first quarter Don Bosco’s Jake Hogan made a 73 yard sprint toward the end zone to score the first touchdown. The two point. conversion from Hogan to Tyler Backes was good.

With 6 minutes, 17 seconds remaining in the first quarter, the Vikings’ Brandon Brockman put the team on the scoreboard just two points shy of the dominant team.

The same sort of thing happened in the second quarter.

Hogan threw a 30-yard pass to Dylan Rhodes for a touchdown. The pass from Hogan to Rhodes was good for the extra points. 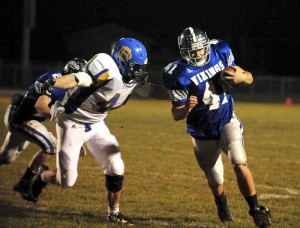 With less than seven minutes left in the half the Vikings had a big play. On their last attempt before they would have had to give possession back to the Dons, Cameron Batton made a 17-yard touchdown pass to Brady Cotter. The Vikings were just four points behind at 16-12.

The Don’s Hogan wasn’t done putting up scores though. He ran in a 42-yard touchdown with 1:15 remaining in the half followed by a run for the extra points. Then, he opened the second half with a 43-yard touchdown run just seven seconds in to leave the Vikings down 30-12.

Don Bosco scored two more times before the night was over.

“We were pleased with how our kids played, but Don Bosco’s talent was the difference between the halves,” Vikings head coach Dave Capitani said. “And, we just couldn’t maintain our intensity in the second half.”