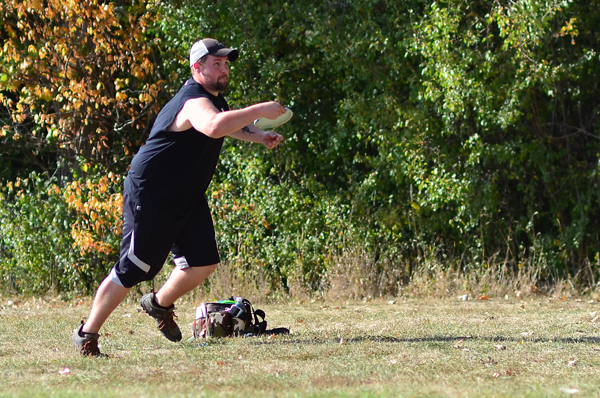 This has been a big year for Albert Lea resident Mike Tabor.

On June 15, he got married to Holly, with whom he has been with since 2004. His oldest son entered a motor sport, and on Saturday Tabor showed he was among the best in town at his sport — disc golf. 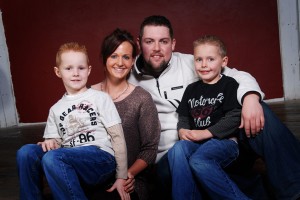 The Tabor family poses for a photo. -- Submitted

Getting married, though, was the highlight of the year.

“We are happier than ever, and it was the best experience of my life,” said Tabor.

Holly’s dad owns Interstate Junction Motorcycles and has been drag racing motorcycles for years. Anthony has been going to Iowa drag strips in Humboldt and Cedar Falls to watch for the last few years, and this year he started helping out grandpa in the pits. He will help with filling gas, checking tire pressures and helping get tools.

Just recently, Anthony decided he wanted to race his Yamaha PW50. They went to the strip in Humboldt and got his first race in.

“It was a blast, I was so excited for him,” Tabor said. “He did a great job. He will hopefully graduate up to a bigger bike next year.” 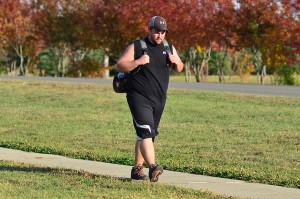 Mike Tabor reflects on his last six holes, in which he birdied all of them, to make a comeback and give him a chance at the Flying Lea Disc Golf Championship. -- Buck Monson/Albert Lea Tribune

Talan is only 6 years old and can’t wait to start drag racing when he turns 8. But for now, he is looking forward to hockey season and starting Cub Scouts.

As a family, the Tabors like to go camping, attend hockey games, have fires in the backyard and watch movies.

Making time for family, school and his hobbies is a full-time job. He has quite a few hobbies, all involving the outdoors.

Tabor enjoys hunting and has been an avid goose and duck hunter for the past six years.

“Hunting is a great way to spend time with friends and family,” he said. “I like getting up early and shooting the breeze with buddies about what we are going to do as far as where to hunt, and how to approach the decoy layout for the weather conditions.”

The boys are at the age now where he will start bringing them with him hunting.

“I am very excited about that, and so are they,” Tabor said.

Ice fishing is one of his favorite winter hobbies. He has ice fished since he was young and remembers sitting on a bucket at the channel at Frank Hall Park. 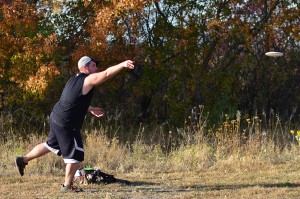 Mike Tabor makes this putt on hole 15 to tie him for the lead at seven under par with eventual winner, Jared Johnson. -- Buck Monson/Albert Lea Tribune

“I don’t know what it is, but fishing through the ice is way more exciting than fishing in the summer,” Tabor said with a chuckle. “Things haven’t changed much now, but I have upgraded to an ice house with a heater.”

Right next to ice fishing on his list of favorite hobbies is disc golf. Tabor played in prior years, but only random rounds with friends, just to get outside.

“It was something that I enjoyed doing with friends, but never thought that I would play competitively,” said Tabor.

This spring marked the first time that Tabor got involved in an organized league and entered in disc golf tournaments. Among meeting new friends and enjoying the outdoors, Tabor also excelled at the sport. Tabor entered the season playing in the lowest division on league nights, and then swiftly moved up through the ranks and finished the year on the highest of highs.

On Saturday, he participated in the Flying Lea Championship, a tourney held by the Flying Lea Disc Golf Club to determine its club champion. Every year players are ranked by their performance and attendance throughout the year and seeded in the tournament accordingly.

“I went into the tournament with the intention of having fun and not worrying about making it to the final four,” Tabor said.

Tabor was seeded 10th in the tourney and had to play against three others in his group and had to beat two of them.

“I ended up having to win a sudden death playoff in the first round to advance to the second round,” he said. “After winning that, I was happy with the results, not thinking that I would make the final four, since I was the underdog.”

In the second round, Tabor was put up against some tough locals and one of Owatonna’s best disc golfers, a player had attended the Albert Lea league on Thursdays all summer. When the round was finished, Tabor tied with the the out-of-towner at one under par.

“As the second round went on, I was playing pretty consistent, and just tried not to pay attention to the score,” said Tabor. “As we got to the last hole, I realized that we were tied for the transfer spot. We finished tied, and I was in another playoff situation, just to move on.”

It took the two players three sudden-death holes to break the tie, with Tabor coming out the victor yet again, beating a great disc golfer.

“I had made it to the top four and was kind of shocked, to be honest,” said Tabor.

One of the perks the last three years to making the final four is that each player receives a PDGA membership, courtesy of the club, a value worth $50 in itself.

“Making the top four gave me a PDGA membership, which was good enough of a prize for me, so I went into the final round again thinking that I was just going to play for fun, because I have already won, in my eyes,” Tabor said.

He started out a little sluggish, as he watched the top two players pull away a bit on the first six holes. Tabor was at least two throws back and was one stroke ahead of fourth place.

“After Hole 6, Buck Monson said to me, ‘I guess me and you will duke it out for third.’ and it was two holes after that I went on a birdie streak,” said Tabor. “It was then, that I decided to just zone everyone else out and play the course, not the other players.”

Tabor went on to birdie the next six holes, shrinking the gap and by the time they teed off on Hole 15, he was in second place, just one throw out of first place, and one throw ahead of third place. The leader then bogeyed Hole 15 and birdied 16,while Tabor and the third-place finisher both parred the two holes, leaving the scores the same.

Hole 17 was the biggest hole in the final round, which saw the leader score a double bogey. Tabor threw it for par, and the guy in third place birdied it. This now put the former leader in third place, one throw out of the lead.

“I didn’t pay attention to the score because if I knew where I was at, all it would do is get in my head and cause me to mess this up,” said Tabor. “We got to the last hole, and heard someone say, ‘this is it, comes down to the last hole,’ and I thought, maybe I have a chance.”

After the final four teed off on Hole 18 and they all played their second shots, all Tabor had to do was to make his 20-foot putt for par, and he would be the Flying Lea champion and winner of $150, on top of the PDGA membership.

“So I still didn’t know what the score was but heard someone say that I was going to win,” Tabor said. “So I approached my putt and unfortunately missed. That left three of us tied for first place. Here I was tied again and had to go into a sudden-death playoff again.”

Tabor was eliminated on the first playoff hole, finishing in the third place spot and winning $50 and the PDGA membership.

“I took third place my first year playing disc golf in the championship event. I was extremely happy with the outcome,” said Tabor. “That tournament was the best disc golf experience that I ever had.”

Tabor will also compete at the North Iowa Tour’s finals in late October in Forest City, Iowa. Tabor will be seeded 26th out of 32 competitors from the Iowa/Minnesota area.

“The best thing about disc golf, in my opinion, is just being outside with friends and having a good time, without having to break the bank,” said Tabor. “Just playing with people who are better is the best way to learn new things.”

Mike and Holly Tabor plan on living in Albert Lea for many years. Both of their parents live here, the kids love going to school here, and and they have a great group of friends here. Although, with the degrees that Tabor is seeking, it might see them have to move out of the area for the sake of a job. Holly is also going to school for human services, so that could be a factor as well.

“If we can stay here, that would make us both happy,” said Tabor.

Livelihood: Works at Interstate Packaging and attends Riverland Community College for two associate’s degrees, one in network security and another in computer technology

Interesting fact: Tabor is from Colorado.