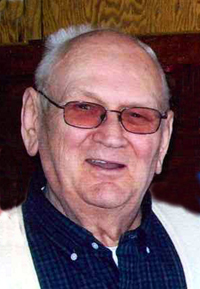 Memorial services will be held at 1:30 p.m. Wednesday at Emmons Lutheran Church in Emmons with the Rev. Cathi Braasch officiating.  Inurnment will take place in Lime Creek Lutheran Cemetery, rural Emmons, with military honors conducted by the Louis Tviete Post No. 317. A memorial visitation will be from 5 to 7 p.m. Tuesday at Emmons Lutheran Church, 490 Pearl St. in Emmons, and will continue one hour prior to services on Wednesday.

Orven Nordine Knutson was born on Jan. 20, 1932, in Albert Lea, the son of Irnel and Tilda (Loftus) Knutson. He was baptized and confirmed at Lime Creek Lutheran Church, rural Emmons. Nordine attended and graduated from Emmons High School.

Nordine was drafted into the United States Army on Feb. 17, 1953, and served in Germany during the Korean Conflict. He was honorably discharged from active service on Jan. 26, 1955.

On Sept. 3, 1955, Nordine was united in marriage with Betty Heather at Salem Lutheran Church in Albert Lea. The couple lived in Albert Lea for a couple of years before moving to Emmons in 1958, where they remained to this day.

Nordine worked for Wilson’s meatpacking plant for over 30 years, and later, owned and operated Knutson’s 66 station in Emmons. He was an active part of the Emmons community serving on the Emmons Fire Department for 31 years, being involved with the Emmons Legion, serving on the Legion honor guard for fallen veterans, and being a justice of the peace – even performing some wedding ceremonies around the kitchen table.

Nordine was a hard worker who enjoyed being outside. He liked to tinker on things at home, mowed lawns for others, gardened, and sold Simplicity lawnmowers on the side. Nordine’s favorite saying was “a hundred years from now, you’ll never know the difference.”

In his free time, Nordine liked to watch NASCAR and was a huge fan of Dale Earnhardt No. 3. He loved to pick on his girls and his grandchildren with games like the whisker rub, and he never ever met a stranger.

He was preceded in death by his parents; a sister Lorraine (Don) Wogen; and a brother Cleon (Mary Esther) Knutson.