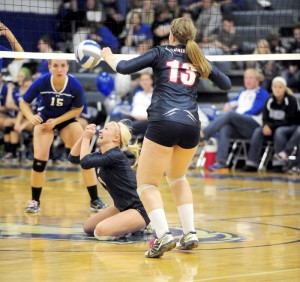 Bryn Woodside digs the ball during a match against Owatonna on Friday. --Danielle Boss/Albert Lea Tribune

Even though the Owatonna girls’ volleyball team beat Albert Lea on Friday night 3-0, the Tigers are celebrating the positive parts of their season.

“We had the second best record of any Albert Lea volleyball team in 15 years,” Tigers head coach Lisa Deyak said. “So to win a section game and have 11 wins is great for us. We’re looking forward to next year.”

Deyak said the issue of Friday’s match wasn’t that Owatonna was a good team with good serving and a diverse offense, it was that Albert Lea didn’t play its top game.

“You can’t go against a top ranked team and just play OK,” Deyak said. “The loss was more about what we didn’t do.”

The Tigers fell short in Game 1 25-15 after missing several serves.

In Game 2, Owatonna jumped out to an early lead and closed the game 25-11 after Albert Lea struggled with its serve receive and Owatonna more than doubled the Tigers kills.

Albert Lea played its strongest in Game 3. The score was close 7-6 until Owatonna went on a four-point run. The Tigers worked their way back to trail by three, but lost the game 25-21.

“It didn’t go as well as we hoped,” Deyak said. “There were times we played really well, but we had a hard time playing consistently through the match.”