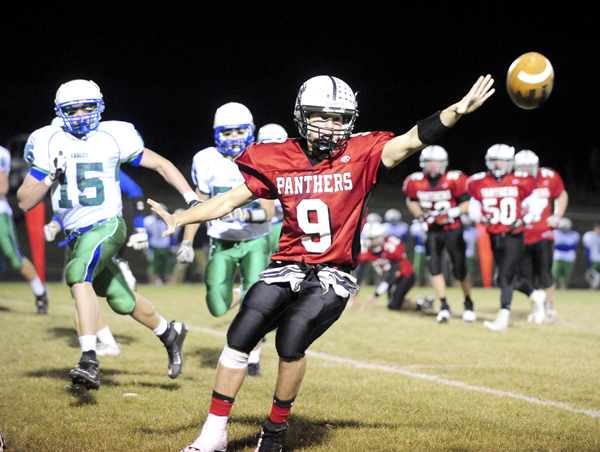 Casey Rosacker makes a pass to Preston Peterson before he could be tackled by a Maple River player. -- Brandi Hagen/Albert Lea Tribune

NEW RICHLAND — The first quarter between New Richland-Hartland-Ellendale-Geneva (1-6) and Maple River (5-2) was scoreless on Friday in New Richland, but the Panthers picked up the first touchdown in the second quarter on a 13-yard run by Dillon Parpart. 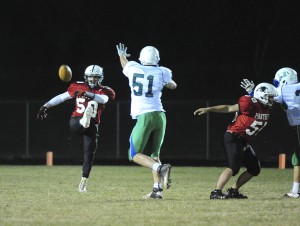 Sam Jewitt punts for the Panthers during Friday’s home game against Maple River.

It was the only touchdown the Panthers were able to make as they lost 21-6 to the Eagles.

Parpart not only scored the lone touchdown, he made 15 tackles on the night, the highest of any Panther player.

Also strong on defense was Noah Krell. Krell made 14 tackles, with one being a sack.

The Panthers biggest downfall of the game was their turnovers. They threw five interceptions.

“Our lack of depth is really hurting us, too,” Panthers head coach Dan Stork said.

The Eagles scored one goal in each of the last three quarters.

“Maple River is a good team,” Stork said. “For the most part we hung with them.”

The Eagles had more than double the amount of passing yards, 181-75, than the Panthers, but led rushing by a slim margin 87-78. The Panthers had nine first downs while Maple River had 11.

The Panthers’ last game of the regular season will be 7 p.m. Wednesday at home against Medford.