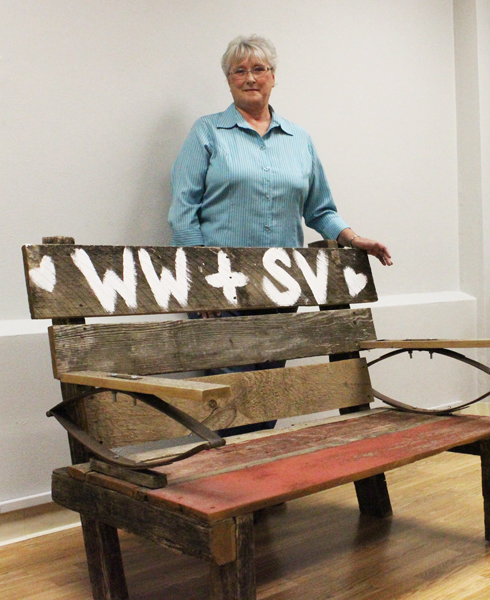 Diane Westland stands next to a bench she made out of materials she found around her farm. The bench is part of the Albert Lea Art Center’s latest show. --Kelli Lageson/Albert Lea Tribune

With a focus on thrift, the newest show at the Albert Lea Art Center is sure to have some distinctive creations. 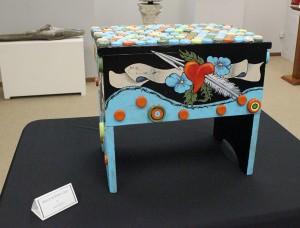 Debb Peterson made the bench covered in bottle caps for the Art Center’s “reshow,” which opens Thursday.

The show is called the “reshow,” and artists were encouraged to use found objects and old pieces to create their art. An open house will be from 5 to 7 p.m. Thursday, and even includes a fashion show at 5:30 p.m.

The “reshow” features local artists, and one, Diane Westland, has seven exhibits. Westland’s largest exhibit is a wooden bench made with scraps of wood and old buggy springs.

“It’s all done out of boards and old pieces,” Westland said.

The top board is painted with the initials of her son and his fiancé that had been used as signs at his wedding. Without counting labor the project cost a little less than $2 because she had to buy bolts. She drew a picture of what she thought it would look like, and her husband, Steve, helped her build it. Using the old buggy springs brought back memories of her childhood when she would go on buggy rides with her family. 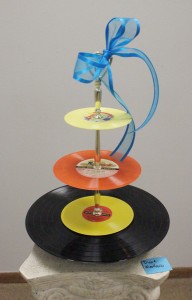 Diane Westland made this piece by replacing plates on a cupcake stand with old records for the Albert Lea Art Center’s latest show.

“It just means a lot to me,” Westland said.

The bench is called “reconstructed.” Other exhibits include “restored from the barn,” which is a small bed made from recycled

pieces, and “recycled art,” which are framed 78 records that she collected from Wheaties cereal boxes as a child.

“They still work,” Westland said with a laugh.

Other pieces include a flower she made using old horseshoes and a chalkboard she painted with special paint so it can be written on with chalk. Another musical piece is one she made by taking apart a three-tier cupcake display and replacing the plates with old records.

“They’re records of mine from the ’50s,” Westland said.

Many other artists made other thrifty creations, and the show will last until Nov. 3. The art center’s hours are 10 a.m. to 2 p.m. Tuesdays through Saturdays. Thursday’s open house will include refreshments and a special fashion show.

The fashion show at the open house will feature thrifty finds like a Ralph Lauren jacket that was $2.50 at a thrift store. Four models will show off clothing and accessories found at both local and out-of-town consignment stores. The public is invited.