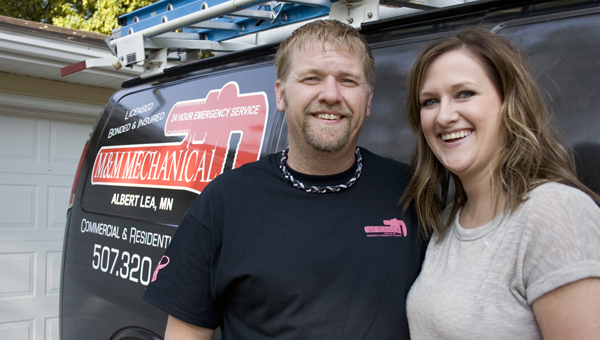 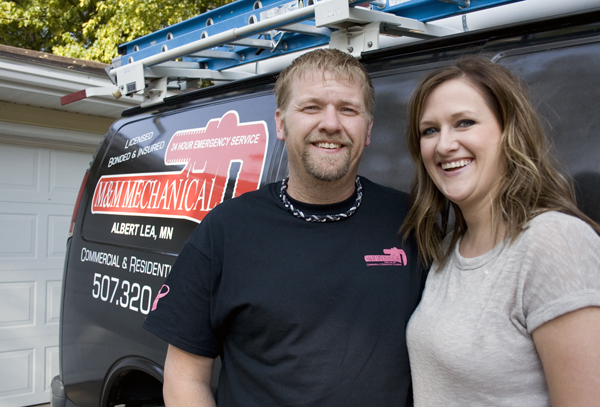 Michael and Michelle Hanson stand in front of their van for M&M Mechanical in front of their home Friday. The company is donating 10 percent from their business proceeds in the month of October for cancer research. --Sarah Stultz/Albert Lea Tribune

An Albert Lea couple with a new plumbing business is donating part of their proceeds this month toward cancer research.

Michael and Michelle Hanson, owners of M&M Mechanical, said they thought it would be a good way to raise awareness for a cause that has affected their lives.

“I can remember just a few years ago, it seemed nobody had cancer,” Michelle said. “Now it seems everybody knows someone with cancer.”

Michael said his grandfather, Bob Peterson, suffered from breast cancer and died at the end of March.

He recalled golfing during the summers with his grandfather when he was younger.

Michelle said her mother, Sandy Murray, found out she had breast cancer eight years ago.

She endured chemotherapy and radiation and, luckily, hasn’t had any issues since.

“Ever since she had it, it has become an important cause to me,” she said. “I have three girls.”

Her mother was the first in her family to have breast cancer.

To honor their loved ones, the Hanson’s will donate 10 percent of their proceeds during October — Breast Cancer Awareness Month — to Susan G. Komen for the Cure.

At the same time, they also hope the drive will raise awareness for their business, which started in February.

Michael said he started as a plumber in the footsteps of his father, who he said was a plumber “ever since I could remember.”

After high school when Michael wasn’t showing much interest in college, his father taught him the trade.

Michael said he was previously working as a foreman at HiMEC Mechanical but after a shoulder surgery and six months of rehabilitation, he went back to find his job was gone.

He offers myriad of services, including commercial and residential plumbing, residential remodels, installation and repair of water heaters and softeners and drain cleaning, among others. He also offers 24-hour emergency service and is licensed, bonded and insured.

Michelle helps out with book work, and the couple has three daughters.

M&M Mechanical can be reached at 320-8774 or online at mandmmechanicalmn.com.

The company operates out of their home at 1109 Richway Drive.