Funeral service for Raymond H. Tow, 84, of Fairmont, will be at 10:30 a.m. Thursday at the Lakeview Funeral Home Chapel in Fairmont. Military honors will be provided by the Lee C. Prentice American Legion Post 36 and Martin County VFW Post 1222. Visitation will be from 5 to 7 p.m. Wednesday at the Lakeview Funeral Home. Private family inurnment will take place at a later date. Ray passed away Sunday afternoon, Oct. 28, 2012, at the Parker Oaks Nursing Home in Winnebago. Memorials are preferred to the Martin County Conservation Club or the Fox Lake Conservation League. 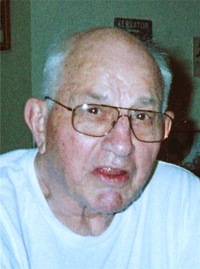 Raymond Harry Tow was born on Aug. 4, 1928, near Willmar. He was the son of Martin and Mathilda (Leisener) Tow. Ray graduated from Fairmont High School and furthered his education at Gustavus Adolphus College where he studied Geology.

On Oct. 24, 1950, Ray enlisted in the U.S. Army. He served with the Army Engineers during the Korean War and earned the rank of corporal. He was awarded the Korean Service Medal with two bronze service stars before receiving an honorable discharge on Oct. 18, 1952.

Along with his parents, Martin and Mathilda Tow, Ray was also preceded in death by his siblings: Harold Tow, Vernon Tow, Robert Tow, and Norma Jane Banton; and sister-in-law, Elizabeth Tow.