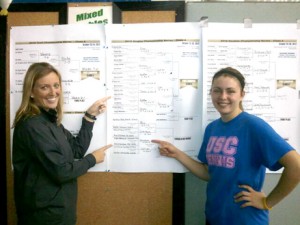 Jill Bailey, left, and Claire Christian point to the Minnesota State High School League state tennis tournament bracket Friday at the Reed-Sweatt Family Tennis Center in Minneapolis. Christian was defeated in the consolation round by Eva Sullivan of Providence Academy 6-3, 6-1. Sullivan was the Class A doubles state champion last year. Christian said Sullvian played a consistent match and was able to get to every ball. As far as her own playing, Christian said she was just trying to stay in the rallies and move around. “I’m really proud of myself,” Christian said. “My goal was to make it to the second day and I did that. I played really well today, she just played better.” The loss to Sullivan ends Christian’s trip to state, but as a junior she still has one more year to set state tournament goals. --Submitted