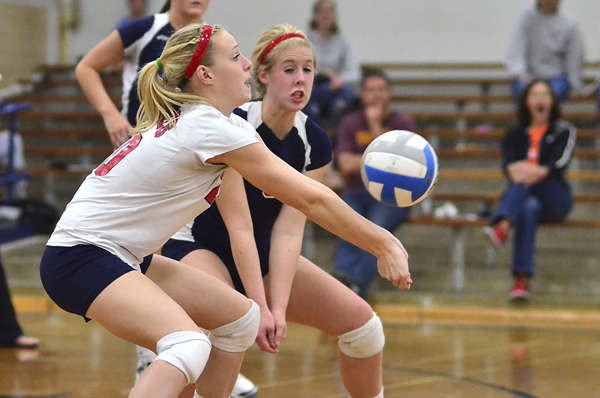 WELLS — The United South Central girls’ volleyball team will move onto the quarterfinal round of the section tournament after a 3-1 win against Martin Luther Monday night.

The Rebels played inconsistently but managed to come out on top when the match was over. They dropped the first game after holding a 16-7 lead but went on to win the next three games.

In the first game, the Rebels jumped to an early lead. Sloppy play allowed the Knights back in the game. The Knights capitalized on the opportunity and closed out the game after tying the game at 23.

Game 2 was similar in the fact that the Rebels scored quickly to start with a 5-0 lead. The teams played evenly until the Rebels turned it on in the end. The final score was 25-15 Rebels.

Game 3 was no different. The Rebels got off to a 6-1 lead and never let the Knights get close enough for them to worry. The game ended on a kill by sophomore, Anissa Janzig, that seemed to spark the team going into the next game.

In Game 4, the Knights scored first. The Rebels reacted by getting the next six points. The teams battled for a few side outs, and with Tara Bauman serving, scored 10 straight points to get the lead 20-6. The Knights had a late charge that was ended with a Bailey Olson kill. The Rebels won the game 25-16, and put themselves into the next round.

On Thursday, United South Central will take on the top-seeded team of Lake Crystal-Wellcome-Memorial.

“We played them our first match of the year,” said Hotzler. “We lost in four games. We need to play better to have a chance against them.”