Richard ‘Dick’ Nibbe Seltz, age 87 of Austin, died Thursday, Oct. 11, 2012, at Our House Memory Care in Austin. He was born July 22, 1925, in Bemidji, to the Rev. Paul and Regina (Nibbe) Seltz. He graduated from Humboldt High School in St. Paul, where he was named All-City third baseman for three years. He played in the St. Louis Cardinals minor league system before his induction into the United States Army, where he served for 2 1/2 years in the South Pacific. Dick’s 2nd Battalion, 19th Infantry, was cut off from all supplies for 13 days behind enemy lines when the unit cut off enemy supplies. Upon his discharge from the Army, Dick returned to minor league baseball with the New York Giants farm team for two years while attending Hamline University, where he was captain of the Pipers. After coming to Austin as part of the Packer’s amateur baseball powerhouse in 1948, he joined the Austin High School faculty as a social studies teacher and baseball coach in 1951. On June 9, 1951, Dick married Rosalie Critchfield of Winona in Good Thunder, where Dick’s father, the Rev. Paul Seltz, performed the ceremony. 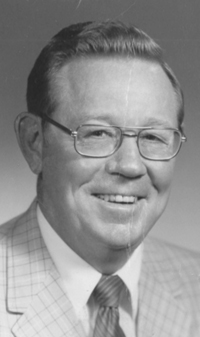 A partnership was developed between Austin High School, Riverland Community College and the city of Austin to build a baseball complex on the college property. Austin High now plays its baseball games in this complex. On Aug. 17, 2006, Dick Seltz Field was dedicated in honor of his life achievements in baseball.

Memorial services will be held at 11 a.m. Tuesday at St. John’s Lutheran Church in Austin with the Rev. Tom Ogilvie officiating. Visitation will be held from 4 to 7 p.m. Monday, at the Worlein Funeral Home in Austin, and one hour prior to the service at the church on Tuesday. Interment will be held at Fort Snelling National Cemetery at a later date. Military honors will be performed by the VFW Post 1216 and the American Legion Post 91. In lieu of flowers, the family prefers that memorials be made to recipient of donor’s choice. Condolences may be expressed to the family online at www.worlein.com