On Oct. 12, 2012, he went to be with his father, the Lord. He often signed off his correspondence with the phrase, “God has been treating me as an only child.” 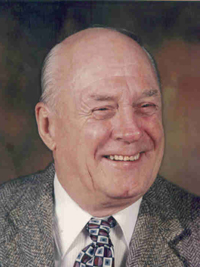 He was born in Albert Lea on Christmas Day, 1922 to Clara Hagen Seevell and Jack Seevell. While still a young child his parents died and he, along with his sister, Gwen, were raised on River Lane by his grandparents, Elize and Ole Hagen who had 13 children of their own.

After a short stint as a gandy dancer with the Rock Island Railroad and working in a CCC Camp in Allen Junction, he enlisted in the Navy during World War II.

In the Navy he became a gunner’s mate and was assigned to protect merchant ships carrying cargo to support the war in Europe and Russia. Gun placements were hastily constructed and placed on each of these merchant vessels. The fleet was only as fast as the slowest ship in the fleet. On one such trip he was on the slowest ship so they decided to drop off his ship at Stockholm so they could make better time with the rest of the fleet continuing the trip to Russia. None of the rest of the fleet made it to their destination. All were sunk by German U-boats. He served on destroyers during the Korean War and recalls shooting trains along the coast while the ship was miles off the coast. The next day they would have the trains up and running again and they would repeat the process.

After that war he transferred to submarines and first served time on diesel submarines. He said people in port could always tell which ship he came from because he smelled like diesel fuel. Eventually he would be assigned to nuclear subs and made what was at the time a classified secret journey under the Polar ice cap.

After 20 years in the Navy, he came back to the land for a while and worked at Ender’s Tool Company, but became disenchanted and headed back to the sea on commercial vessels. He signed up for a 90 day trip on a tanker, but because of the blockage of the Suez canal, and various crew members jumping ship at ports along the way, he was gone for a whole year. This wouldn’t have been so bad but the ship’s cook used onions in everything and Roger hated onions.

Eventually he left the sea and found a job in Sitka, Alaska, working in the pulp mill as a painter.

By now Roger was a confirmed bachelor but somehow he fell in love with a widow, Mary Hudson, and was happily married to her until she passed away in 1982.

He was very active in his church in Sitka, serving as a greeter, a maintenance man and a mission trip worker. He was a talented wood worker and a self taught trumpet player.

He will be sorely missed by his nine stepgrand children, his love for them had a profound influence on their lives. He was a man with a quick wit and a caring heart.

He is survived in Albert Lea by his aunt, Virginia (Bernie) Higgins, who is the sole survivor of the 13 children of his grandparents.

He was buried in the national cemetery in Sitka with full military honors from a Navy honor guard from Anchorage.